The CLEVELAND CLINIC DISASTER (also known as the CLINIC FIRE) occurred on 15 May 1929 and cost the lives of 123 people, but stimulated the development and enforcement of safety regulations in U.S. hospitals. The fire began in the main building of the CLEVELAND CLINIC FOUNDATION, where it is believed that nitro-cellulose x-ray film, exposed to heat from an unguarded 100-watt incandescent light bulb, released smoke and poisonous gases (primarily phosgene). Although the CLEVELAND FIRE DEPARTMENT extinguished the fire and helped people escape the deadly yellow and brown vapor, 80 visitors and patients and 43 employees of the clinic died as a result of the disaster, and 92 were injured. Dr. JOHN PHILLIPS, a founder of the Cleveland Clinic and head of the Medical Dept., died as a result of toxic gas inhalation. 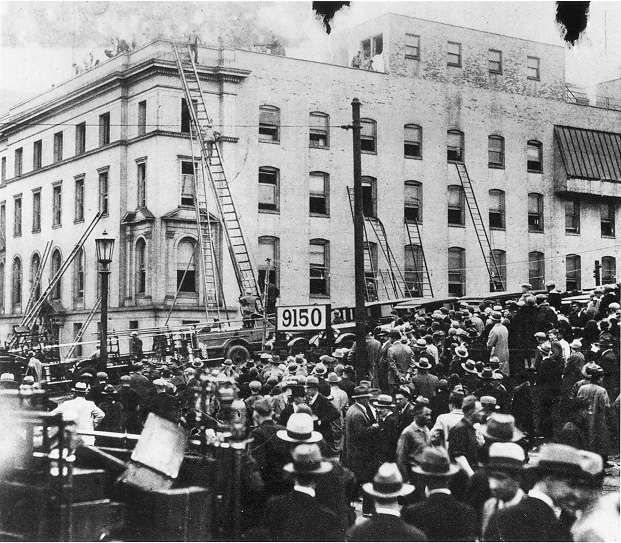 Cleveland Clinic officials were absolved of responsibility for the fire and the $3 million in lawsuits, filed as a result of the disaster, were settled out of court for about $45,000. The City Manager's commission investigating the fire recommended that Cleveland's police and fire departments be supplied with gas masks and that a municipal ambulance service be established to provide suitable transportation for emergency cases needing hospital care. On the national level, the clinic fire resulted in the development of new standards for storage and labeling of hazardous materials, especially nitro-cellulose film. Fire insurance companies also began to revise and strictly enforce safety regulations regarding the storage of such materials.