The CLEVELAND FIRE DEPARTMENT evolved from the village's first firefighting organization, the Live Oaks No. 1 volunteer fire association, organized in 1829. Its equipment, obtained in 1833, was a hand-operated fire engine—an improvement over the cisterns and buckets used prior to that time. The city's first regularly organized firefighting company followed in 1834, when the volunteer company Eagle No. 1 was established. By 1835 there were 4 volunteer fire companies, including 2 engine companies, a hook-and-ladder company, and a hose company. The first chief of the volunteer department was Samuel Cook. 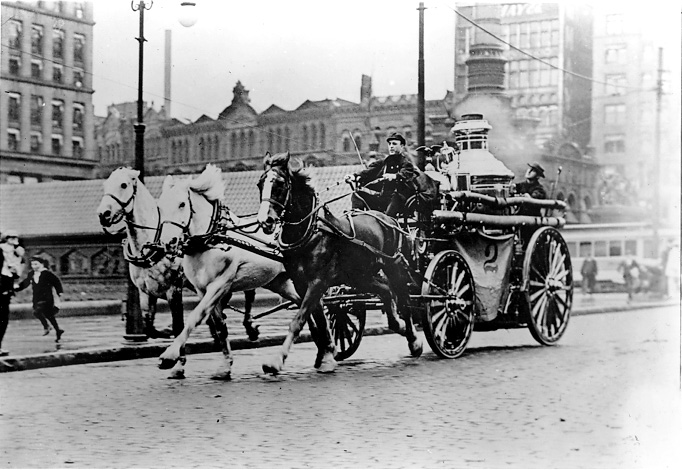 By 1853 the department had grown to include 8 engine companies and a hook-and-ladder company. Piped-in city water was available for the first time to fight fires when the municipal waterworks opened in 1856. The ranks of Cleveland's volunteer firemen were depleted during the Civil War, with fully two-thirds serving in the armed forces. As a result, the city council authorized a paid steam fire department of 53 men in 1863. At that time the city owned 4 steam pumping engines and a hook-and-ladder. A fifth steam engine was purchased in 1864, and a fire alarm telegraph system was installed. In 1865 there were 167 fire hydrants and 75 reservoirs throughout the city.

The department grew steadily in personnel and technology in an effort to keep pace with the expanding city. The city purchased its first piston pump fire engine in 1875, and 3 years later the department had its first aerial ladder. After newly appointed chief James Dickinson reorganized the 17 existing companies into 3 battalions in 1880, the first sliding poles were used, and 5 new engines and an extension ladder were added. But despite these strides, 2 disastrous fires in the FLATS caused widespread destruction in 1884. Much new equipment was bought as a result of these fires, including the department's first fireboat, the Joseph L. Weatherly, and the department experienced remarkable growth. By 1909 the department had over 500 men. In 1912 the first motorized apparatus, a 53-hp 6-cylinder pumper engine, was placed in service at the newly organized Engine Co. 34 on Ashbury Ave. By 1925, all companies were motorized. Also that year, the Training School Division of the Fire Department opened at its downtown headquarters.

GEORGE A. WALLACE, serving as chief from 1901-31, continued the department's expansion to over 1,400 members. While the size of the department remained relatively stable for the next several decades, the number of alarms rose steadily. In 1963 the 1,250-member department answered over 14,000 alarms. The same year 7 firefighters were killed in the line of duty, including 4 in the downtown explosion of a leaking propane gas truck on 13 Aug. It was both the worst single disaster and the largest number of firemen killed in a single year in the department's history. The number of alarms continued to escalate in 1975 as 1,190 members of the department responded to over 35,000 alarms. In 1994 the Fire Dept. responded to 48,000 alarms, of which 1,793 were structure fires. There were 23 civilian fatalities. In 1995 William Lee served as chief of the department, which employed 886 firefighters and 14 civilian employees.