CLEVELAND MUNICIPAL STADIUM, constructed on reclaimed land on the city's lakefront, was completed in 1931; at that time it boasted the largest individual seating capacity (78,189) of any outdoor arena in the world. A municipal stadium was first discussed in the early 1900s as a site for high school athletic contests. City Manager WILLIAM R. HOPKINS raised the issue again in 1923, and in 1928 Cleveland voters approved a $2.5 million bond issue to support construction. Designed by OSBORN ENGINEERING and the architectural firm of WALKER & WEEKS, the stadium was completed on 1 July 1931, and 2 days later a championship boxing match between Max Schmeling and Young Stribling was held there (see SCHMELING-STRIBLING FIGHT). The CLEVELAND INDIANS played their first game in the park on 31 July 1932; however, the team continued to split its home season between the stadium and LEAGUE PARK until 1947, when it finally moved its entire home season to the stadium. During that year, professional football also came to the stadium. By the 1960s, CLEVELAND BROWNS football became the major attraction in terms of overall attendance. 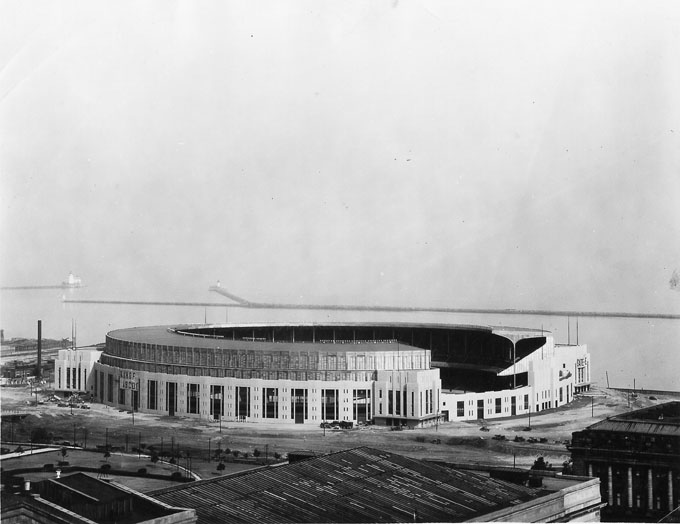 During its history the stadium has been used for a variety of sporting and nonsporting events, including rock concerts in the 1970s and 1980s, opera, circuses, the FESTIVAL OF FREEDOM, and the 7TH NATIONAL EUCHARISTIC CONGRESS of 1935, which attracted 125,000 people, the all-time attendance record for the facility. By the 1960s, the stadium began to show its age. Although the city issued $3,375,000 in bonds to provide for improvements in 1966, including a new Cleveland Browns office and new ticket facilities, the facility was still considered outmoded compared to the new stadiums constructed throughout the country. Given further municipal fiscal problems, Cleveland Browns owner Art Modell offered to manage the stadium and was given a 25-year lease on the facility in 1974. His Stadium Corp. put $8 million in improvements into the structure, including 108 loges built under the edge of the upper deck. In 1994 the stadium was no longer home for the Cleveland Indians, who moved to Gateway's Jacobs Field in downtown Cleveland. Following the Indians' departure, the stadium diversified its non-football season venues, hosting an increased number of entertainment events, including rock concerts, religious revivals, and the inaugural ROCK AND ROLL HALL OF FAME concert in Sept. 1995. Also in 1995, the City of Cleveland and the Stadium Corp. continued discussions concerning funding options for further renovations.

These conversations came to an abrupt halt when Art Modell announced on Nov. 6, 1995 that he was moving the Browns to Baltimore for the 1996 football season. The announcement secured the demise of the stadium. The initial demolition of the stadium began on Dec. 17, 1995 as fans began tearing out the wooden bleacher seats in the Dawg Pound to take home for souvenirs after the final Browns' game at Cleveland Municipal Stadium. In January 1996, Michael White reached an agreement with the owners of the NFL that Cleveland could keep the Browns name and colors and would be granted an expansion team in 1999 if they would agree to construct a new stadium to league specifications. Plans to construct the new stadium (Cleveland Browns Stadium) on the same site as Cleveland Municipal Stadium were approved in April 1996. Osborne Engineering Co., the company that constructed the stadium, was selected to oversee its demolition. Demco Inc. won a $2.9 million dollar bid to demolish the stadium. Wrecking balls began clearing away portions of the bleachers in November 1996. The Donald Gray Gardens, built behind the stadium in 1936 for the Great Lakes Exposition, did not survive the demolition of the stadium. By March 1, 1997, Cleveland Municipal Stadium had been completely demolished and the debris had been removed to clear way for construction of the new stadium. One fourth of the old stadium, 5,000 cubic yards of reinforced concrete, was eventually located a half mile offshore and composed two fishing reefs each about 600 feet long, 20 to 50 feet wide, and 2 to 15 feet high. One reef lay off of Perkins Beach, just west of Edgewater Park, and the other was offshore from Euclid General Hospital.