The CLEVELAND, SOUTHWESTERN & COLUMBUS RAILWAY, the 2nd-largest interurban in the state at one time, connected Cleveland with Columbus to the south and Norwalk to the west. It originally was chartered in 1876 as a horsecar line known as the CLEVELAND & BEREA STREET RAILWAY, but it did not exercise its full franchise privileges. The line was rechartered by the Pomeroy family in 1891 as an electric-powered railway running from Cleveland to BEREA and began operation in 1895. Later that year, the Pomeroys formed a partnership with the Cleveland banking firm of M. J. Mandelbaum & Co in order to finance the line's extension to Elyria. The Pomeroy-Mandelbaum syndicate continued purchasing and operating other short rail lines, and in 1903 their holdings were merged into the Cleveland & Southwestern Traction Co. which provided service as far as Norwalk and Wooster. Southern routes to Bucyrus and Columbus were acquired and on 4 March 1907 the 225-mile Cleveland, Southwestern & Columbus Railway was chartered. Known for its distinctive dark-green cars, the railway also operated several amusement parks along its routes to draw riders, including PURITAS SPRINGS PARK in Cleveland. 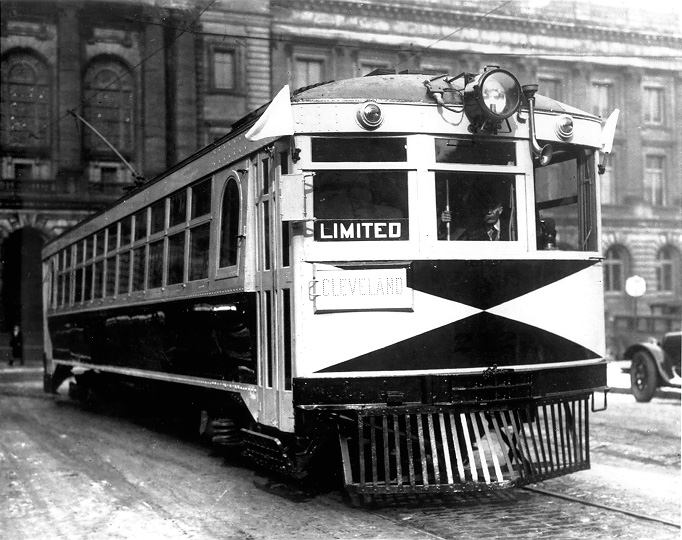 The CS&C went into receivership in 1922. Although it returned a profit in 1923 after abandoning its Norwalk-Oberlin run, continued losses led to further abandonments in 1926 and the replacement of rail service with buses. After that, the line became known as the Southwestern. The Southwestern made transportation history in 1928 by offering the first coordinated rail-air service package to Detroit in conjunction with STOUT AIR SERVICES. Passengers purchased a through ticket to Detroit, and the CS&C dropped off riders at the Cleveland Airport for the flight to their destination. Revenues continued to plunge however, and in 1929 the line went into receivership again and made its final trip on 28 Feb. 1931. Some of Southwestern's bus operations were taken over by the North Olmsted Municipal Bus line.