The CLEVELAND WORKHOUSE at Cooley Farms was recognized throughout the U.S. as one of the finest and most progressive penal institutions of its kind. It became a model for similar institutions around the world. The city's first workhouse was established in 1855 on Scranton Rd. with the city infirmary. In 1871 it moved to a new building on Woodland Ave. at E. 79th St., where it remained until 1912. Dr. HARRIS R. COOLEY, welfare director under Mayor TOM L. JOHNSON, had a social vision of the city providing a wholesome environment which would aid the rehabilitation and/or recuperation of those city dwellers suffering from the evils of urban living. At his urging, Cleveland spent more than $350,000 between 1904-12 purchasing 25 neighboring farms (over 2,000 acres) in rural WARRENSVILLE TWP. to establish such a complex. 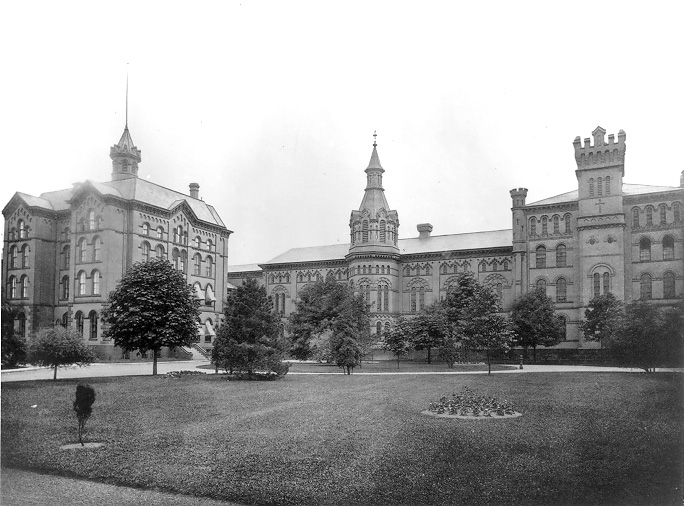 The farms were originally divided into 4 institutions, each containing about 500 acres. Cooley Farms was the city infirmary or poorhouse, which included dormitories, small cottages for elderly couples, and a halfway house. Overlook Farm (later called Sunny Acres) was the tuberculosis sanatorium. Highland Park Farm was the municipal cemetery, and the Correction Farm was the site of the city workhouse where prison inmates lived in dormitories. The penal farm's primary purpose was to provide productive work for prisoners in farming, dairying, gardening, and orchard maintenance. In addition to growing fruits, vegetables, and feed, the prisoners cleared and maintained the grounds and also operated a blacksmith shop, a cannery, a piggery, and a sawmill. The excess farm produce was sent to various welfare institutions, which saved the city considerable money. The inmates also received medical, religious, educational, and vocational guidance services, and a liberal parole program was instituted. By 1925 the workhouse was overcrowded, with an increasing number of bootlegging and speeding convictions, and in 1927 a new women's building was constructed to provide more room. At that time the average daily population exceeded 750. By the 1960s the conditions at the aging facilities had deteriorated significantly. By 1975 most forms of prison labor were abandoned, except for a large garden. New substance-abuse and work-release programs were instituted in the 1980s and in 1985 plans were announced for a new facility to be built at the site.

Finding aid for the Cleveland Workhouse and House of Refuge and Correction Records, Series I, WRHS.

Finding aid for the Cleveland Workhouse and House of Refuge and Correction Records, Series II, WRHS.

Finding aid for the Cleveland Workhouse and House of Refuge and Correction Records, Series III, WRHS.

Speir, F. Leslie. Cleveland: Our Community and Its Government (1941), CWRU.