COWAN POTTERY STUDIO, based in ROCKY RIVER, was one of the nation's leading potteries in the 1920s. R. (REGINALD) GUY COWAN, founder of the company, was born in 1884 in East Liverpool, OH, into a family of potters. He moved to Cleveland about 1908 and began teaching that year at East Technical High School. That same year he founded a pottery studio in a barn at Euclid and E. 107th St. In 1913 he quit teaching and relocated the pottery to Nicholson Ave. in Lakewood. He closed the pottery down while he served in the army from 1917-19. 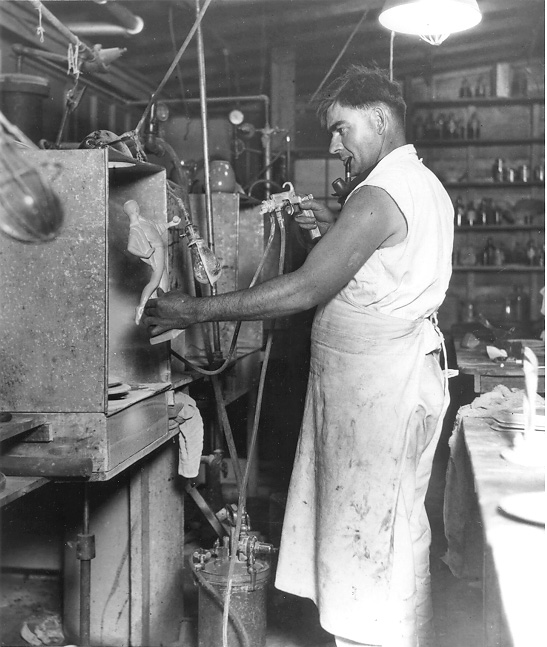 Upon his return he reopened the company and, with the help of the Cleveland Chamber of Commerce, established a plant at 19633 Lake Rd. in Rocky River. Within a decade the firm was employing 35 people and producing 175,000 pieces a year. There were 1,400 retailers throughout the Western Hemisphere selling Cowan pottery, including some of the nation's leading department stores. Examples were also purchased by several art museums, including Boston's and Chicago's. Cowan was considered a pioneer in promoting ceramic, instead of bronze, marble, or wood, as a medium for sculpture.

A majority of the firm's output was designed by Cowan himself, though he had help from other Cleveland artists including Edgar and Thelma Frazier Winter, Viktor Schreckengost, and Elizabeth Anderson (later Mrs. Eliot Ness).

The company was unable to survive the Depression. The pottery closed in 1931 and the stock was sold to the Bailey Co. department store. R. Guy Cowan later moved to New York state and died there in 1957.