DRISCOLL, CLARA (15 Dec. 1861- 6 Nov. 1944), ​was head of the Tiffany Studios Women's Glass Cutting Department in New York City. Born Clara Pierce Wolcott, Driscoll was originally from Tallmadge Ohio and was the eldest daughter of Elizur V. Wolcott and Fannie Pierce. At the age of twelve, her father passed away. While uncommon during this time period, Driscoll and her three younger sisters were encouraged by their mother to pursue higher education. Clara took advantage of her flair for art and attended the Western Reserve School of Design for Women (now the CLEVELAND INSTITUTE OF ART.) She also worked for a local furniture maker, but eventually moved to New York City and enrolled at the Metropolitan Museum Art School. Louis Comfort Tiffany noticed Driscoll's artistic potential and hired her to work at Tiffany Glass Company (later known as Tiffany Studios) in 1888. Driscoll worked with Tiffany off and on for more than 20 years, designing lamps as well as supervising the Women's Glass Cutting Department. These women were nicknamed the “Tiffany Girls.” Driscoll designed more than thirty Tiffany lamps produced by Tiffany Studios, among them the Wisteria, Dragonfly, and Peony. 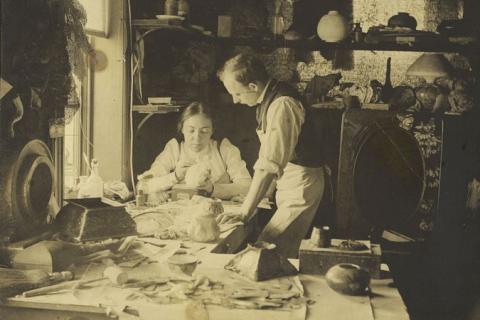 Upon her marriage in 1889, Driscoll had to leave Tiffany Studios because married or engaged women were not allowed to work for the company. After her first husband, Francis Driscoll, passed away in 1892, she began working with Tiffany again, but subsequently quit after getting engaged to Edwin Waldo in 1896. Waldo disappeared and the marriage never occurred, so once again Driscoll went back to work at Tiffany until her engagement to Edward A. Booth in 1909. She was married to Booth for thirty-five years. Driscoll and Booth traveled back and forth between New York and a house in Point Pleasant, New Jersey, until 1930 when Booth retired. The couple then retired to Florida, and kept the Point Pleasant house as a summer home, and spent their later years between New Jersey and Florida until Clara died on November 6th, 1944. Today, Driscoll’s name still makes the headlines. As new information came to light, it turned out the “Tiffany Girls” and Clara Driscoll were the ones who had created many of the Tiffany lamps originally attributed to Louis Comfort Tiffany and his staff of male designers. On October 20th, 2019 the CLEVELAND MUSEUM OF ART opened an exhibition entitled ​Tiffany in Bloom​, dedicated to the lamps of Louis Comfort Tiffany. This exhibition noted Tiffany’s “reliance on women designers, such as Ohio native Clara Driscoll,” demonstrating the role played by Driscoll and other women designers in creating products that helped build the firm’s reputation as one of the finest makers of glass and other decorative arts products.