The EAST OHIO GAS CO. EXPLOSION AND FIRE took place on Friday, 20 Oct. 1944, when a tank containing liquid natural gas equivalent to 90 million cubic feet exploded, setting off the most disastrous fire in Cleveland's history. Homes and businesses were engulfed by a tidal wave of fire in more than 1 sq. mi. of Cleveland's east side, bounded by St. Clair Ave. NE, E. 55th St., E. 67th St., and the MEMORIAL SHOREWAY. At approx. 2:30 P.M., white vapor began leaking out of Storage Tank No. 4, which had been built by the East Ohio Gas Co. in 1942 to provide additional reserve gas for local war industries. The gas in the tank, located at the northern end of E. 61st St., became combustible when mixed with air and exploded at 2:40 P.M., followed by the explosion of a second tank about 20 minutes later. The fire spread through 20 blocks, engulfing rows of houses while missing others. The vaporizing gas also flowed along the curbs and gutters and into catch basins, through which it entered the underground sewers, exploding from time to time, ripping up pavement, damaging underground utility installations, and blowing out manhole covers. The immediate area surrounding the burning district was evacuated and refugees were sheltered in Willson Jr. High School on E. 55th St. where the Red Cross tried to care for approx. 680 homeless victims. 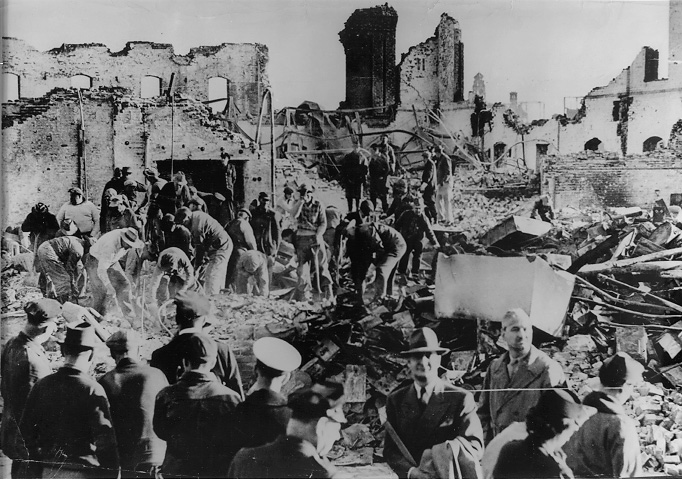 By late afternoon Saturday much of the fire had burned itself out, electricity was restored in some areas, and the next day a few residents began returning to their homes. The fire destroyed 79 homes, 2 factories, 217 cars, 7 trailers, and 1 tractor; the death toll reached 130. The fire and subsequent analysis of its cause led to new and safer methods for the low-temperature storage of natural gas.