The ELYSIUM, once a landmark at the corner of E. 107th St. and Euclid, was once the largest indoor skating rink in the world. Conceived and built by DUDLEY HUMPHREY and his brothers, of EUCLID BEACH PARK, it was built in 1907 for a reported $150,000 and named as a result of a contest. ElysiumFrom October to May, when Euclid Beach was closed for the season, the Elysium offered afternoon and evening skating sessions to the music of popular bands, as well as skating lessons. As professional HOCKEY became popular, the Elysium became home to the Cleveland Falcons, later the CLEVELAND BARONS. In addition, it was the site of international and local figure-skating contests. Its operations were interrupted during World War I when the building was used as a barracks for the Student Army Training Corps for Case Institute. As both ice hockey and figure skating became more popular in the 1930s, the Elysium suffered because of lack of audience capacity, and the Barons moved to the CLEVELAND ARENA. With the onset of World War II, wartime shortages and impending takeover of the building by the military caused the rink to close in 1941. By 1942 the land reverted to its original owner, the Case School of Applied Science, but the building was used for another decade as a bowling alley and used-car showroom. After the city of Cleveland acquired the property in 1951, the building, by then dilapidated, was razed and the land used to widen Chester Ave. 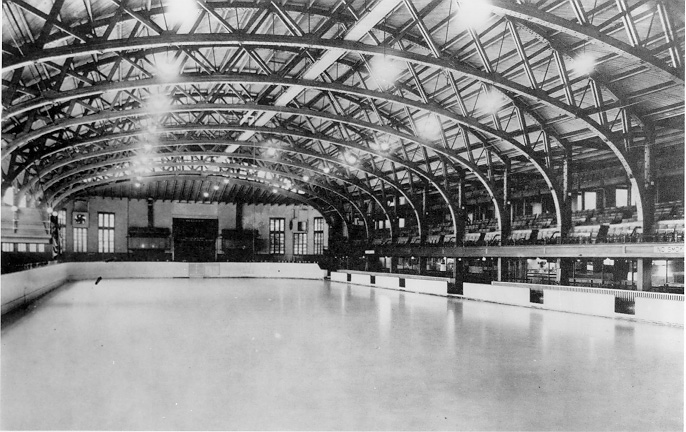 Interior of the Elysium, n.d. WRHS, courtesy of the Kekic Collection.