The EUCLID AVE. BAPTIST CHURCH (1846-1957), called "Mr. Rockefeller's church," originated in the spring of 1846 when a group of teachers from the FIRST BAPTIST CHURCH and several other churches organized the Cleveland Union Sabbath School. Miss Frances Twitt, one of the teachers, is considered the founder. The school first met in a building at Eagle St. and Erie (E. 9th) St. In 1848 the Sunday school, which had moved to the corner of Kinsman and Erie St., had so expanded that property at Erie and Ohio (Central Ave.) streets was purchased, and a new building erected in 1850. When the congregation of the Second Presbyterian Church (later part of CHURCH OF THE COVENANT) moved to Superior St., the Baptists purchased that building, on Rockwell St., and in Mar. 1851 moved it to the Erie St. property. Rev. J. Hyatt-Smith became pastor in Apr. 1851; religious services began on 20 July 1851. Forty-four members received permission to separate from First Baptist, and on 19 Aug. 1851 organized the Erie St. Baptist Church. 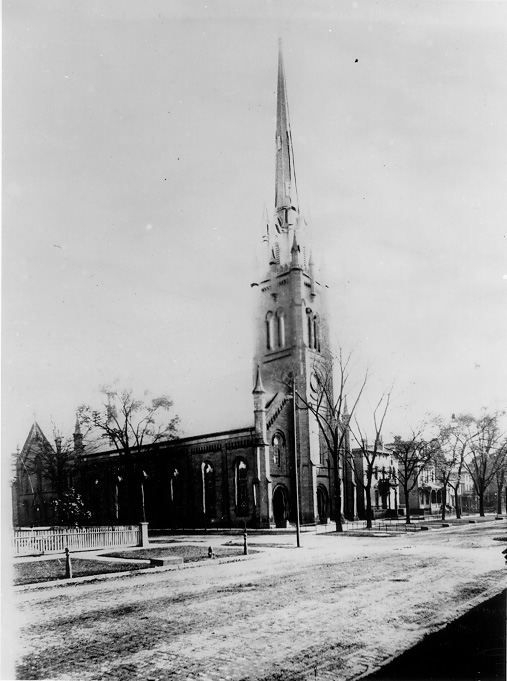 During the pastorate of S. B. Page (1861-66), the church assumed control of the Scovill Ave. Baptist Mission at Sterling (E. 30th) and Scovill Ave. The name was changed to Second Baptist Church of Cleveland in 1868. With a substantial increase in membership, it was decided to relocate; the building was sold to the German Evangelical Protestant Church. Property at the southwest corner of Huntington (E. 18th) St. and Euclid Ave. was purchased, and on 14 June 1871 the cornerstone was laid. The name was changed to Euclid Ave. Baptist Church. JOHN D. ROCKEFELLER, who had joined the church when he was a teenager, had taught Sunday school and served as superintendent at the Scovill Mission. He was named superintendent of the Erie St. Church Sunday school (1872-1905). One of the church's most generous benefactors, he also served as a trustee (1883). The church organized the Judson Missionary Society, the Garden St. Mission, the St. Clair Mission, and the Baptist Home for Old People.

When membership rose to over 2,000, the church sold its property to John D. Rockefeller, Jr., and constructed a larger building on the northwest corner of Euclid and E. 18th St. The first services were held there on 23 May 1926. In June 1926, John D. Rockefeller, Sr., contributed $200,000 and $100,000 in matching funds. John D. Rockefeller, Jr., also contributed $50,000 toward completion of the new auditorium. The $1.25 million building, designed by WALKER AND WEEKS, was constructed of glazed terra cotta brick. It had a 234' frontage on the west side of E. 18th, an auditorium seating over 2,300, and a 2-story Sunday school unit. During the week of 3-8 Apr. 1927, Dr. John Snape led formal dedicatory services. Although the church prospered for several years, it was threatened with foreclosure on the mortgage in Feb. 1934. In Oct. 1936 Dr. D. R. Sharpe, executive secretary of the Cleveland Baptist Assn., appealed to the Rockefellers. They contributed $250,000 for purchase of the land and the building but stipulated that the titles be transferred to the Baptist Assn., and that they not be asked to contribute again. During the pastorate of Dr. Bernard C. Clausen in the 1940s, the neighborhood changed. There was dissension within the congregation over Clausen's preaching and political stance, accompanied by a steady decline in membership; he resigned in 1950. In Jan. 1956 the 300-member congregation decided to discontinue the church, and on 1 July 1956 Rev. Richard Waka conducted the final service in the chapel. For the next several years, the building served as headquarters for the Cleveland Area Church Federation, the Cleveland Baptist Assn., and the INNER CITY PROTESTANT PARISH. On 8 July 1957, Baptist Assn. delegates empowered the trustees to sell or lease the building. It was demolished in the fall of 1961; the property eventually became a parking lot.