The EUCLID AVE. OPERA HOUSE was known as one of the finest theaters in the U.S. Located at the southeast corner of Euclid Ave. and Sheriff St., it was built in 1875 at a cost of $200,000 and described on its opening night (6 Sept. 1875) as elaborate, luxurious, and very beautiful. It was completely carpeted, with a painted dome and intricate plasterwork. The interior included an auditorium 70' deep x 65' wide, a 54' x 76' stage, and a proscenium that measured 34' high x 37' wide. D. Graham, a specialist in theater architecture, designed the structure, which seated 1,638. When refitted from gas to electricity in 1885, it was among the first theaters in the U.S. to make this move. JOHN A. ELLSLER, formerly of the ACADEMY OF MUSIC, formed a stock company that established the Euclid Ave. Opera House. Soon after its founding, Ellsler lost his fortune, and the opera house was sold at a sheriff's sale to MARCUS A. HANNA, who leased the theater to AUGUSTUS HARTZ from 1884-1920. On 24 Oct. 1892 the theater was destroyed by fire, but it was rebuilt on a grander scale than before, reopening on 11 Sept. 1893. In 1899 it hosted Cleveland's first official visit by the Metropolitan Opera Co. of New York. It thrived throughout the early 20th century but was demolished in 1922. The HANNA THEATER, located at Euclid Ave. and E. 14th St., became its successor. 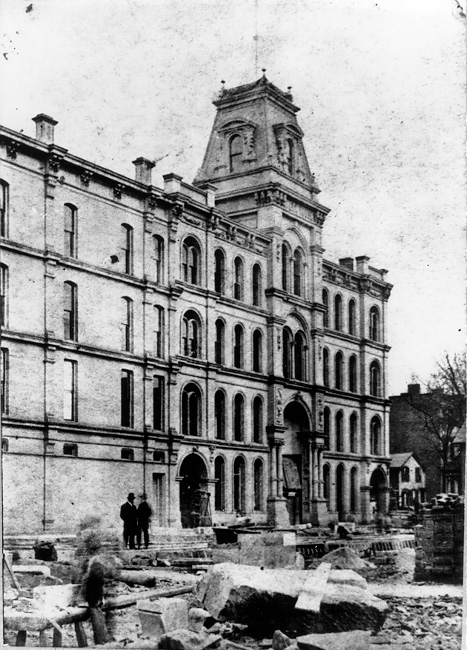