FELLER, ROBERT WILLIAM ANDREW “BOB”  (3 November 1918-15 December 2010) was a Hall of Fame pitcher, and possibly the greatest player ever to put on a CLEVELAND INDIANS uniform.

Feller was born in Van Meter, Iowa, the son of Bill and Lena Feller. Legendary Indians scout Cy Slapnicka found Feller playing semi-pro baseball in his home state and promptly signed the fireballing teen to a contract for one dollar and an autographed baseball in 1935. The following year, he was supposed to go to a minor league team in Fargo, but Slapnicka brought him to Cleveland, ostensibly to play for a local sandlot team. Once Feller made his debut in an exhibition game at LEAGUE PARK against the Cardinals, striking out eight of nine batters he faced, he was quickly assigned to the Indians. When he made his major league debut on 19 July 1936 at the age of 17 – before he’d even graduated high school – he was the youngest pitcher to ever appear in a major league game. A month later, on 23 August 1936, Feller struck out 15 batters, one shy of a league record, in his first start. 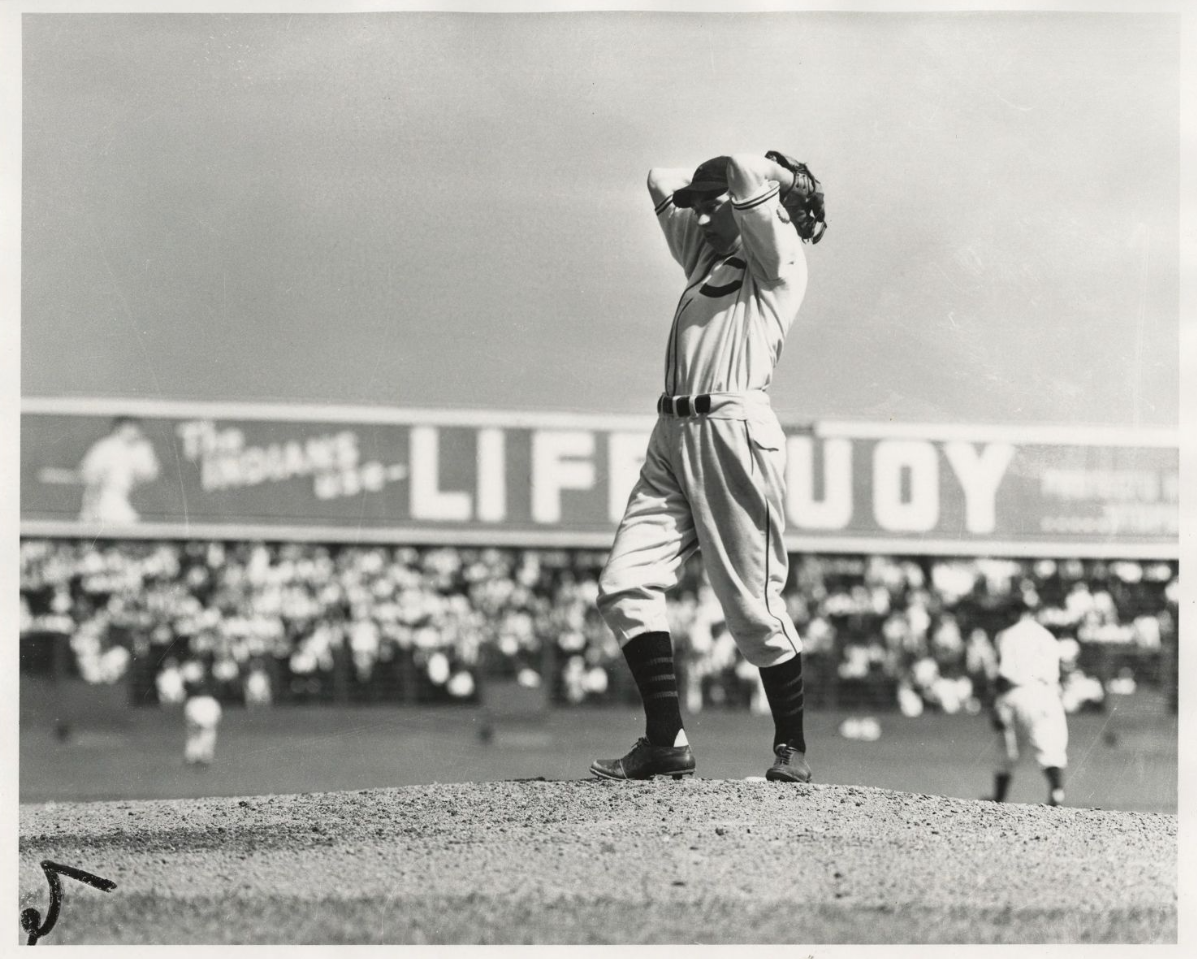 In 1938, he struck out 18 batters in a game, setting a league record that would stand for more than 30 years. The following year, he won 24 games, the first pitcher to win more than 20 games in a season before he was 21 years old. In 1941, he went 27-11 and threw the first of his three no-hitters, on Opening Day against the White Sox.

Two days after the Japanese attack on Pearl Harbor on 7 December 1941, Feller put his major league career on hold and joined the Navy. He returned to the Indians briefly in 1945 after serving in World War II, and in 1946 went 26-15 and pitched his second no-hitter.

As the late 1940s wore on, Feller was eclipsed by his Indians teammates, including Bob Lemon and Early Wynn, but when Feller retired following the 1956 season, he held the record for no-hitters in a career with three. The mark was eclipsed by Sandy Koufax, who threw four, and then obliterated by Nolan Ryan’s seven no-nos. Feller still holds team marks for wins (266), strikeouts (2,581), shutouts (46) and innings pitched (3,827). His career numbers could have been even greater had he not lost four years in the prime of his career while serving in the Navy.

Feller was named to eight All-Star teams, starting two Midsummer Classics, and still holds the team’s single season record for strikeouts (348). Based on tests at the time, it is estimated that Feller could throw a fastball around 108 mph. His number 19 was the first retired by the team, a year after his retirement, and Feller was inducted into the Baseball Hall of Fame in his first year of eligibility in 1962, and when Jacobs Field opened in 1994 – with Feller throwing a ceremonial first pitch – a statue of him stood outside.

After Feller retired as a player, he served as the first president of the Major League Baseball Players Association, which had been founded two years earlier, in 1954, and briefly worked in the broadcast booth. Endorsements and investments kept him earning money – as did autograph signings – and Feller served as an ambassador for baseball and the Indians. He could regularly be found at spring training, and until his death, was a regular in the Jacobs/Progressive Field press box.

Feller started a museum in his hometown of Van Meter. The museum closed after his death, and some of it can be seen on display at the Terrace Club in PROGRESSIVE FIELD.

Feller married the former Virginia Winther in 1943. They had three sons, Steve, Marty and Bruce, before divorcing in 1971. Virginia Feller died in 1981. Feller married his second wife, the former Ann Gilliland, on Oct. 1, 1974. They remained married until his death.  Feller was buried in GATES MILLS North Cemetery.