The FIRST PRESBYTERIAN CHURCH (OLD STONE) grew from a Plan of Union Sunday school established in 1820, incorporated as the First Presbyterian Society in 1827. The oldest structure on PUBLIC SQUARE it is one of Cleveland's few early churches remaining in its original location. The sandstone church building, which became known as "Old Stone," was the second within the Cleveland limits, built at Ontario St. and Public Square between 1831-33. First Presbyterian Church (Old Stone)This Georgian Revival-style building was razed and the cornerstone laid for a larger Romanesque Revival church in 1853 (completed in 1855), designed by the local firm of Heard & Porter, assisted by Wareham J. Warner, masterbuilder. The building, with a 228' steeple, was severely damaged by fire in 1857. The exterior walls survived, but the steeple did not; the interior was entirely rebuilt the next year. A spire added to the east tower in 1868 was removed following a second fire in 1884. CHARLES F. SCHWEINFURTH designed the rebuilt interior in the Romanesque Revival style, with an arched ceiling, stained glass windows by Louis Tiffany and John LaFarge, and frescoes by Julius Schweinfurth. 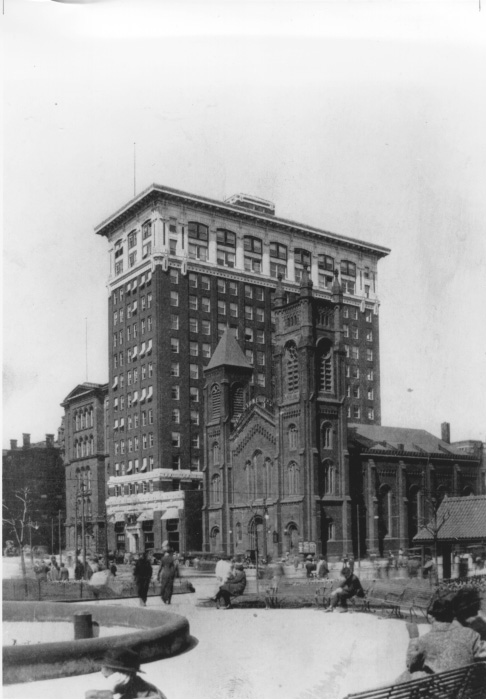 Old Stone Church has dealt with a migrating congregation since the 1850s but has continuously decided to remain on Public Square. It has supported inner city ministries such as Goodrich House (later GOODRICH-GANNETT NEIGHBORHOOD CTR.) and the Home for the Friendless (later part of Cleveland City Hospital), which opened in church parlors during the Civil War to care for southern refugees. Community leadership was provided by senior pastors such as Rev. HIRAM C. HAYDN, who retired as pastor emeritus (1872-80, 1884-1902). Under his leadership, the Cleveland Presbyterian Union (later the PRESBYTERIAN UNION) formed to extend church work. Old Stone Church has spawned many other area churches, including First Presbyterian of Brooklyn (1835), Bethel (1835), Second Presbyterian (1837), NORTH PRESBYTERIAN CHURCH (1870), CALVARY PRESBYTERIAN CHURCH (1892), Bolton Ave.(1892), Windermere (1892), Trinity (1894), and Lakewood (1912).