The GLENVILLE RACE TRACK, part of an 87-acre development that attracted the city's wealthy sportsmen in the summer, was located on St. Clair between E. 88th and E. 101st streets where it was considered a first-class racecourse. Once the site of horse, auto, bicycle, and foot races, the Glenville track was built in 1870 by the Cleveland Driving Park Co. as part of the Northern Ohio Fair, whose major grounds were located across the street. The Northern Ohio Fair Assn., a stock company formed by leading citizens, including Frank Rockefeller, SYLVESTER EVERETT, Warren H. Corning, and HOWARD M. HANNA, promoted AGRICULTURE, horticulture, the mechanical arts, and trotting races. Although the fairground was abandoned in 1881, the driving-company venture remained successful until 1908, with harness races as the track's principal attraction. In 1872 Cleveland joined with Buffalo, Utica, and Rochester to become the Quadrilateral Circuit; within a year the group became part of the Grand Circuit, the major league of harness racing. In July 1876 a famous race, immortalized in verse by Oliver Wendell Holmes, pitted the famed Goldsmith Maid against Smuggler at the Glenville track. On 30 July 1885, William H. Vanderbilt's Maud S. set the world record for trotting (2:08 3/4) there. Horseracing at Glenville was later promoted by the Gentlemen's Driving Club, organized in May 1895 by HARRY K. DEVEREUX, Col. Billy Edward, and DANIEL RHODES HANNA. Devereux, the most prominent of the local drivers, amassed records and awards. 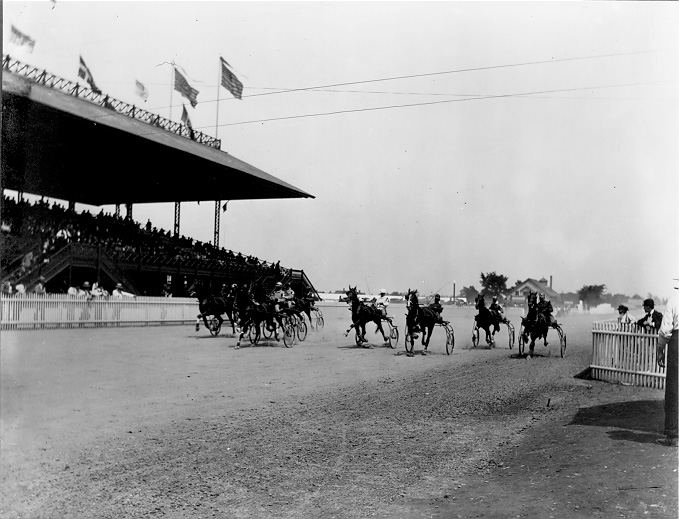 The sporting life of the track overflowed into the nearby Roadside Club, where race spectators and participants wined and dined. Even after harness racing lost its appeal, the Roadside Club (also known as the 9100 club) prospered as a gambling club until 1935. The Glenville track was also used for auto racing where speed trials and match races featured well-known drivers such as Barney Oldfield. Fueled by the growth of Cleveland's AUTOMOTIVE INDUSTRY, many cars were tested there, including locally built Baker Electrics and Wintons. Despite the popularity of racing at Glenville, the track was abandoned in 1908 when GLENVILLE mayor FREDERICK GOFF declared betting illegal, and the center of local racing shifted to the village of NORTH RANDALL. The popularity of trotting races, the main attraction at Glenville, waned within a decade of its closing, and the Gentlemen's Driving Club passed out of existence prior to World War I.