The GRAND PRIX OF CLEVELAND, a 500-km IndyCar auto race, has been held annually at BURKE LAKEFRONT AIRPORT since 1982, and was originally known as the Budweiser-Cleveland 500. The race became the Cleveland Grand Prix in 1984, and was changed again to the Budweiser-Cleveland 500 in 1985. Subsequent names for the event corresponded with the primary sponsors: In 2002, the race was referred to as the "Marconi Grand Prix of Cleveland Presented by U.S. Bank." 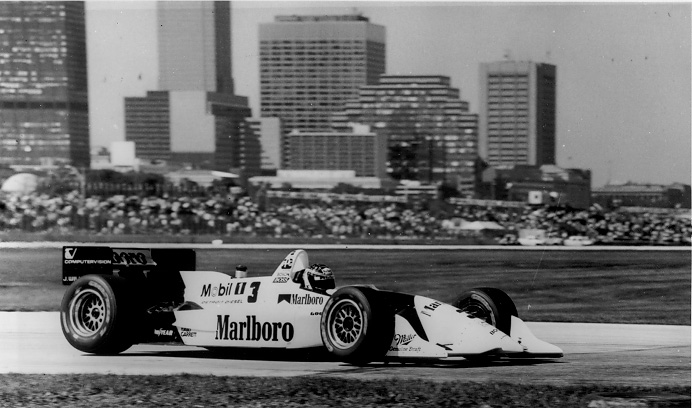 The concept of a local race in the style of the Indianapolis 500 was conceived by promoter Charles K. Newcomb in 1981 and was then approved by CART (Championship Auto Racing Teams, Inc.). The first race, with its $200,000 prize money, cost over $1 million to stage, with funds coming from the gate, a major sponsor, and grants from auto accessory companies. The course, planned with the permission of the FAA, was designed to test both straight speed and turns. Two parallel airport runways (3 times wider than the Indy track) were linked to permit 125 laps on a 2.48 mile course with 12 turns—8 to the right and 4 to the left. Cars were expected to reach 185 mph, although the track record as of 2002 was 147.512 mph, set by Gil de Ferran on 22 July 1995. The first race was held on 4 July 1982, after 2 days of qualifying heats, and was won by Bobby Rahal of Columbus, OH. Although the unique character of the course made the race popular with drivers, July temperatures magnified the heat in the cars, and it was shortened to 200 mi. in 1984, although by 1995 the race had been expanded to 213 miles, consisting of 90 laps on a 10-turn, 2.37 mile course. Bleachers and support facilities for the 60,000 daily race fans are constructed on the south side of the track to permit a full view of the course during the 3-day event.

The race became part of the PPG IndyCar World Series in the 1990s, as Medic Drug, Dairy Mart, and the INTL. MANAGEMENT GROUP became primary sponsors, with IMG administrating the race's marketing. In September 1999, IMG Motorsports and CART (Championship Auto Racing Teams Inc.) agreed to a new three-year deal, thus keeping the race in Cleveland through at least 2002. Recent first-place winners were Patrick Carpentier (2002), Dario Franchitti (2001), Roberto Moreno (2000) and Juan Montoya (1999). The Grand Prix is also affiliated with Cleveland Grand Prix Charities, Inc. Established in 1982 as the Cleveland 500 Foundation, the organization sponsors parades and celebrity races during race weekend and other events throughout the year to assist local charities.