HALTNORTH'S GARDENS, located at the corner of Woodland and Willson (E. 55th St.) avenues (1001 Woodland), was a popular German beer garden in which Clevelanders could enjoy a picnic or an evening of beer and opera. A rustic bridge crossed a pond on the grounds, which were surrounded by "a high whitewashed wooden fence" that enclosed the garden. From June through September, a stock company managed by Chas. L. LaMarche presented light opera in the covered theater, which seated 600-800 people. These beer gardens were apparently established by Frederick Haltnorth (1825-82), a native of Dessau, Germany, who came to the U.S. in 1849.

Although the Haltnorth's Gardens of the 1880s and 1890s was a pleasant, relaxed gathering place, that of the 1860s and 1870s appears to have been altogether different, judging from accounts in the CLEVELAND LEADER. A proponent of temperance, the Leader complained in 1863 that the beer garden, then located on Kinsman St., was a gathering place for thieves, pickpockets, prostitutes, and "shoulder-hitters," and was the greatest "nuisance" the city had ever faced. Attempts were made to prevent the streetcars from running to the gardens on Sunday in order to hold business and sin there to a minimum. By 1867, however, the gardens had become a gathering place for a variety of organizations holding special meetings and celebrations, and there were concerts by German singing societies and other musical groups. By 1872 Haltnorth's Gardens had moved from Kinsman to the corner of Woodland and Willson and was under the proprietorship of Geo. Mueller. It had several proprietors over the years, and by 1905 had become the Coliseum Theater. 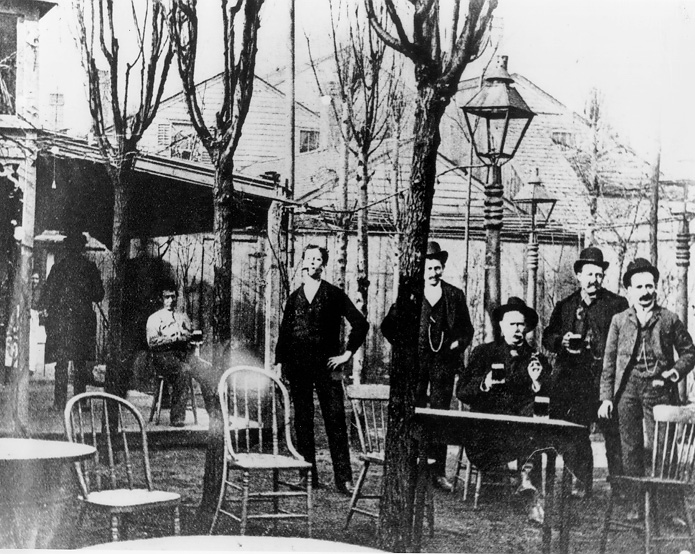