The HOLLENDEN HOTEL, once the most glamorous and colorful of Cleveland's hostelries, opened on 7 June 1885. It was the first large hotel for transients east of PUBLIC SQUARE and offered accommodations for permanent residents as well. LIBERTY E. HOLDEN purchased land from Philo Chamberlain and formed a corporation to build the 8-story Hollenden Hotel at Superior and Bond (E. 6th) St. Designed by architect GEO. F. HAMMOND, it boasted electric lights, 100 private baths, and fireproof construction, a lavish interior with paneled walls, redwood and mahogany fittings, and crystal chandeliers. Politicians claimed the dining room and made it famous as a meeting place. The hotel hosted 5 presidents, industrial giants, and celebrities of stage and platform. 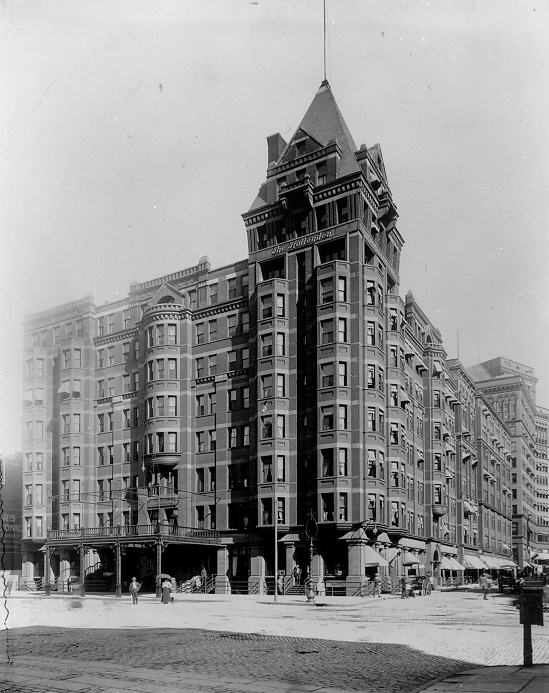 In 1926 a $5 million annex was built on the east side of the hotel, and the main building was modernized. The hotel had several owners over the years until the 600 Superior Corp. bought it in 1960, but two years later, with only about 350 of the 1,000 rooms in use, the owners closed the Hollenden and demolished it. The 600 Superior Corp., along with developer Jas. M. Carney, then built a new 14-story, 400-room Hollenden House and parking garage on the site, which opened in Mar. 1965. The Hollenden House did not survive the decline of downtown Cleveland, and when it became unprofitable in the mid-1980s, Carney closed it permanently in May 1989. Later that year the relatively new building was demolished, making room for developer John W. Galbreath to build a 32-story office building.