The INTERNATIONAL LADIES GARMENT WORKERS UNION (ILGWU) struggled to gain a foothold in Cleveland during the first 2 decades of the 20th century. Toward the end of the 19th century, poor working conditions and low wages caused some workers to form small seasonal unions, such as the Cleveland Pressers' Protective Union of 1899. Union interest increased in 1900, when the ILGWU was established in New York City, and shortly thereafter several well-organized affiliates were created in Cleveland: the Cloak Cutters' Assn., Local 10, the Cloak Makers' Union, Local 13, the Cloak Pressers' Union, Local 14, the Ladies' Garment Workers' Union, Local 14, and the Ladies' Garment Cutters' Union, Local 48. When the Cleveland firm of PRINTZ-BIEDERMAN refused to renew its union agreement in Aug. 1904, locals 13 and 14 called a general strike without the international's approval. The strike ended in failure and disruption of the unions. The ILGWU chose Cleveland in 1910 for a special organization drive. With 33 firms and 5,000 dissatisfied workers, Cleveland was ready, and a strike was called 6 June 1911 (see GARMENT WORKERS STRIKE, 1911). However, manufacturers were able to continue to fill orders. The international, unable to meet strike expenses, called the strike off in October. 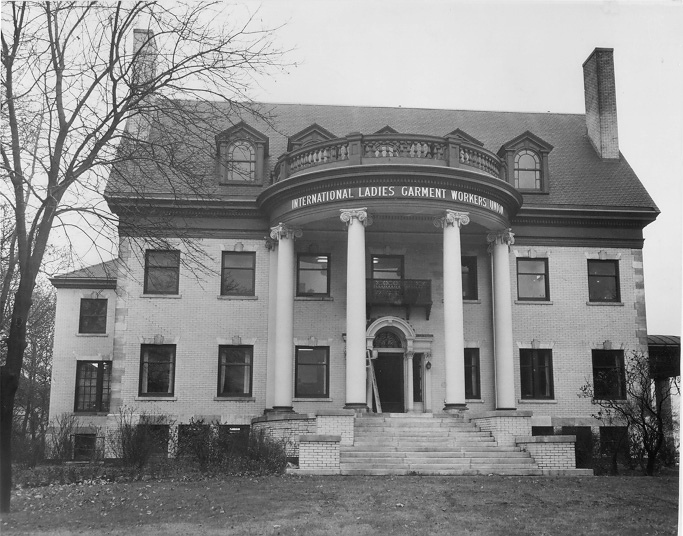 The Carlin House, at 3233 Euclid Avenue, one mansions of Euclid Avenue served as the Headquarters for the International Ladies Garment Workers' Union when this photograph was taken in the 1950s. Courtesy of the Plain Dealer.

The union made no headway against the Cleveland Garment Manufacturers Assn. until 1918, when the international launched a campaign to increase union membership, then called a general strike on 23 July 1918. After 4 weeks of unsuccessful negotiations with employers, Secretary of War NEWTON D. BAKER intervened, drafting a settlement which was accepted in 1919. The landmark agreement between workers and employers in the Cleveland garment trade established collective bargaining in the city. In succeeding years, the decline of the garment business in Cleveland adversely affected union membership. In July of 1995, the ILGWU merged with the AMALGAMATED CLOTHING & TEXTILE WORKER UNION to form the Union of Needletrade, Industrial and Textile Employees (UNITE). The new union was one of the biggest in the country, with 350,000 members nationwide and 8,000 in Ohio. In 1995, UNITE had 16 local affiliates in the Cleveland area.