JORDAN MOTOR CAR CO., noted for promoting its product through innovative advertising, was founded by EDWARD S. (NED) JORDAN in June 1916. Located at 1070 E. 152nd St., the firm sold 1,788 cars the first year of its operation. With generous profit margins on its automobiles, the Jordan Co. enjoyed spectacular financial success and the original stockholders received a 1,900% return on their investment. Jordan Motors The first cars were 4- and 7-passenger custom touring cars and a Jordan "60" Roadster with a top speed of 29.4 mph. A Friendly Three Coupe was introduced in 1920—"Seats two, three if they're friendly"—was the slogan. The company's most famous car was the Jordan Playboy, advertised as a "style of living" in 1923. Realizing that a sales pitch based on technicalities reached only a small group, the advertising campaign reached a larger audience by suggesting that its ownership would make a buyer happier. The company introduced one of America's first compact cars, the Little Custom Jordan, in 1927, but at $1,595 the price was too high for a car competing with other models in the low-price field. Only 6,258 were sold in 1927 and the year ended with a deficit of $1,426,000. Production was suspended in Mar. 1931 and Jordan went into voluntary receivership on 8 May 1931 after selling some 30,000 cars during its 16 years in business. 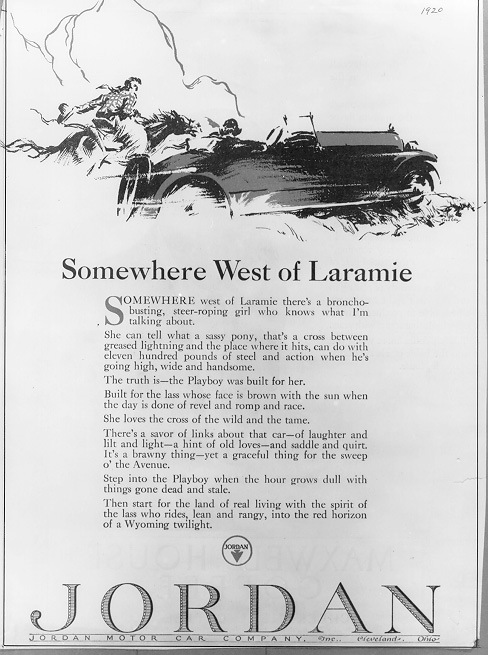 This advertisement for the Jordan Playboy coupe is considered a landmark in the history of automobile promotion, 1920. WRHS.