KARAMU HOUSE is a neighborhood settlement that became nationally known for its dedication to interracial theater and the arts. It was founded as the Neighborhood Assn. at 2239 E. 38th St. in 1915 by 2 young white social workers, ROWENA and RUSSELL JELLIFFE, with the support of the Second Presbyterian Church, but it soon was popularly known as the Playhouse Settlement. As an entry into community life, the Jelliffes began producing plays with interracial casts in 1917. Their affiliation with the church ended in 1919, when they incorporated as the Neighborhood Assn. In 1920 they sponsored the Dumas Dramatic Club, which was renamed the Gilpin Players, after the noted black actor Charles Gilpin in 1922. A theater was acquired adjacent to the settlement in 1927 and named "Karamu," Swahili for "a place of joyful meeting," a name adopted by the entire settlement in 1941. In the 1930s the Gilpin Players established a collaboration with Karamu alumnus LANGSTON HUGHES, giving premieres of several of his plays. In 1940 a modern dance troupe from Karamu trained by Marjorie Witt Johnson won the praise of Life magazine for its appearance at the New York World's Fair. Following a fire which destroyed the theater in 1939, Karamu was eventually rebuilt in 1949, through the aid of LEONARD HANNA, JR., and the Rockefeller Foundation as a 2-theater complex at E. 89th and Quincy. Facilities were also provided for Karamu's noteworthy programs and classes in dancing and the visual arts. Led in the 1950s by such professional staff members as Benno Frank and Reuben Silver, Karamu gained a reputation as one of the best amateur groups in the country. With the rise of Black Nationalism in the 1970s, however, it embarked upon a controversial course which promoted theatrical presentations primarily by blacks about the black experience and its attempt to form a professional acting company in 1982 proved unsuccessful. In 1980 Marjorie Witt Johnson, together with Karamu artistic director Linda Thomas Jones, founded the Imani African American Dance Co., a troupe which danced to African drum beats, reminiscent of the original Karamu Dancers. 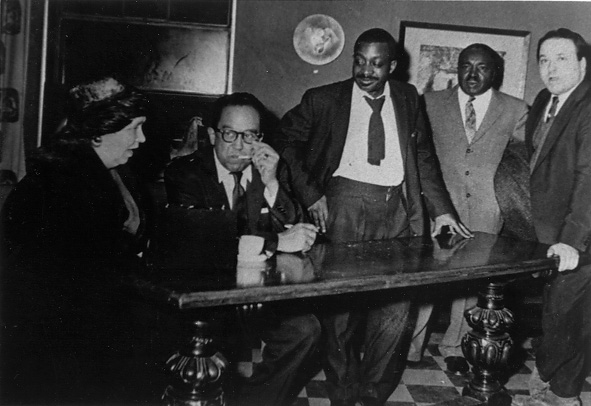 Langston Hughes sits at a table with four performers at the Karamu Theater. Courtesy of the Karamu House.

With the appointment of Margaret Ford-Taylor as executive director in 1988, Karamu attempted to return to its multicultural roots as a metropolitan center for all races while fulfilling its "unique responsibility" for the development of black artists. The Karamu's Drama/Theater for Youth Project was cited for excellence by the Ohio Alliance for Arts Education in 1991 and in 1993 it won the first annual Anne Flagg Award given by the American Alliance of Theater in Education honoring outstanding work in the promotion of multicultural understanding. In May 1994 Karamu joined with BANK ONE to open the Karamu Community Banking Center within the Karamu complex.

As a community-based nonprofit arts and education institution, Karamu House has maintained its historic commitment to encouraging and supporting the preservation, celebration, and evolution of African-American culture. As a cultural institution, Karamu presented a regular yearly schedule of six plays ranging from serious dramatic plays to musical, and as an educational one, it provided classes in drama, dance, music, and art in conjunction with before- and after-school programming with acting instruction for youth. In 2008, the Department of Justice's Office of Juvenile Justice and Delinquency Prevention awarded Karamu House $170,000 to increase digital arts classes for children who do not receive computer training at school.

Over its ninety years history, Karamu has cultivated a well-deserved reputation for nurturing African American actors. Among notable performers who refined their craft at Karamu and later found success on Broadway, in Hollywood, and at stages and concert halls throughout the world were Ruby Dee, Ron O'Neal, Robert Guillaume, and Imani Hakim. One of the most treasured of Karamu's productions was the annual holiday presentation of "Black Nativity," a play by Langston Hughes. It also hosted an annual free Martin Luther King, Jr. Day celebration and encouraged a candid public discussion of relevant issues in "talk-back sessions" preceding select performances.

In 2009, Karamu House boasted three performing halls: 215-seat Jelliffe Theatre, 100-seat Arena Theatre, and 90-seat Anne Mae's Theatre. It also operated a day care facility, a summer camp, and a community outreach program. Gregory Ashe, the former president of Boys and Girls Clubs of Cleveland, served as the executive director of Karamu House since 2007 and Terrence Spivey as the artistic director of the venerable organization since 2003.

Finding aid for the Russell and Rowena Jelliffe Papers, WRHS.

Finding aid for the Russell and Rowena Jelliffe Photographs, WRHS.