KAUFMANN'S, A DIVISION OF THE MAY DEPARTMENT STORES CO.

KAUFMANN'S, A DIVISION OF THE MAY DEPARTMENT STORES CO. (formerly May Co. of Cleveland) is one of the area's largest retailers. The parent company, founded in Denver in 1888 by David May and his brothers-in-law, Louis, Joseph, and Moses Schoenberg, relocated its headquarters to St. Louis by 1899. At that time it entered the Cleveland market by purchasing the E. R. Hull & Dutton Co. at the southeast corner of PUBLIC SQUARE on Ontario St. Louis Schoenberg (see LOUIS BEAUMONT) managed May Co. in Cleveland, expanding the Public Square store. In 1900 May erected a 3-story annex, and in the following years purchased additional buildings, giving the store EUCLID AVE. frontage. In 1904 NATHAN L. DAUBY became store manager, overseeing further expansions until May became Ohio's largest department store in 1931. Dauby guided the firm for 6 decades, strengthening its reputation as a retail leader by introducing free Eagle trading stamps, a patrons' garage, and a children's playground for its customers' convenience. In 1939 May Co. secretly acquired a substantial interest in its competitor, the WILLIAM TAYLOR SON AND CO., which continued to operate under its own name until May closed it in 1961. 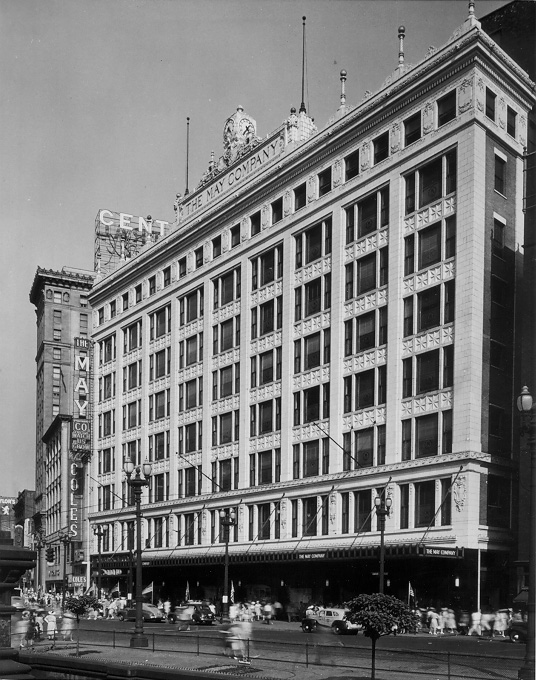 The May Co. store on Public Square during a busy day in 1941. Courtesy of the Plain Dealer.

In the late 1950s, May Co. expanded into the Cleveland suburbs. By 1979 it had opened 9 branches in the Cleveland-Sandusky area. During the same period, the parent company in St. Louis expanded and diversified its holdings, acquiring department and discount store chains across the nation, including Pittsburgh's Kaufmann Department store chain in 1946. May Co. of Cleveland remained strong, but the high cost of operating the downtown store forced it to reduce the store's retail space by leasing several floors to a local bank in 1980. By 1983 the company had over $212 million sales in Cleveland. However, when TOWER CITY CENTER opened in March 1990, retail traffic patronized stores within its complex to the detriment of the downtown May's, farther up Euclid Ave. In Jan. 1993 the parent company closed the store after liquidating the stock, and the remaining 15 stores in May's Ohio chain took the Kaufmann name and were transferred to its Kaufmann Div.