The LEISY BREWING CO., at 3400 Vega Ave. on the near west side, was once Cleveland's largest independent brewery. It was established by Isaac Leisy (1838-92), an Iowa brewer who purchased Cleveland's Frederick Haltnorth Brewery in association with 2 brothers; together they established Isaac Leisy & Co. in 1873. Leisy soon gained a reputation for its Premium Lager and Budweiser beers (Budweiser was not then a brand name). Leisy Brewing Co.With the departure of his brothers in 1882, Isaac Leisy as sole owner and manager substantially enlarged the brewery, replacing the old buildings with modern ones occupying 8 acres of land. Production rose from 12,000 barrels in 1873 to over 90,000 in 1890. Leisy employed 75 workers, mostly German-Americans. He died in 1892, shortly after completing a baronial brownstone mansion next to the brewery, and his son, Otto I. (1864-1914), assumed control. During Prohibition, the brewery was closed and its equipment sold, but with repeal Herbert F. Leisy (Otto's son) reestablished the Leisy brewing dynasty. He reequipped and modernized the brewery with assistance from Carl Faller, the oldest active brewmaster in the U.S. when he died in 1939. In the 1950s, Leisy Black Dallas malt liquor and Leisy Light, Dortmunder, and Mello-Gold beer were distributed in Ohio and 5 neighboring states. To increase capacity, in early 1958 Leisy purchased the Geo. F. Stein brewery in Buffalo. Geo. S. Carter, former Leisy sales manager who had propelled PILSENER's P.O.C. to a leading position in Ohio, returned to Leisy in June 1958 as president and a substantial owner, but all operations ceased the following year. Pointing to Ohio's $.36-a-case tax as a major factor in its demise, Leisy was the oldest brewery in Cleveland and one of the longest surviving family-operated breweries in America when it closed. 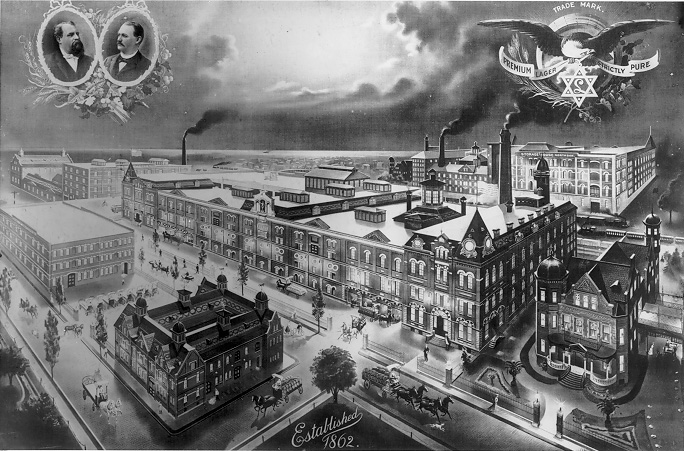