LEBRON JAMES BANNER.  LeBron James, the NBA superstar who played for the Cleveland Cavaliers from 2003-2010 and again from 2014-2018 was portrayed on several large banners hanging from the Sherwin Williams building in downtown Cleveland.

Cleveland, Miami, and Los Angeles have been the basketball homes of the Akron native.  But, Cleveland has considered him a native son. That status was best exemplified by the banners that hung on the eastern side of the Sherwin Williams building on the corner of Ontario and Prospect Avenue in downtown Cleveland. Between 2005 to 2018, four, ten-story, 25,000 square-foot Nike sponsored banners featuring James became civic icons. The first banner was installed on November 8, 2005 showing a then twenty-one-year-old James dunking with the slogan “We are all witnesses”.  That banner was replaced on October 26, 2007 with one that showed a front view of James doing his signature pregame powder toss. It hung until his controversial departure to the Miami Heat in July of 2010. According to Sherwin-WIlliams after James announced his decision, fans responded by throwing rocks at the banner and attempting to climb fencing in order to tear it down. Sherwin Williams Chief Executive, Chris Connor, called Nike about removing the banner to which Nike reportedly responded with “We know. Nobody wants that banner down more than we do”. It was replaced by a Sherwin Williams advertisement showing a black and white photograph of the Cleveland skyline just in time for the Cavaliers 2010 home opener.

On July 11, 2014, James announced he would return to the Cavaliers. Before the season opening  game on October 30, a new LeBron banner went up. This time James was portrayed from behind with the word “Cleveland” on the back of his jersey - a subtle nod to the swell of hometown pride and goodwill that accompanied his return to the team. In its time hanging above Prospect and Ontario, the banner would see the Cavs win the NBA title in 2016 breaking the city’s 52 year championship drought. It was slated to come down for the Republican National Convention that summer on the heels of the championship, but public outcry forced Sherwin Williams to pledge that the banner would remain in place - at least temporarily. That banner would be replaced on October 17, 2016 by a nearly identical one, the only difference being the application of a small patch emblazoned with the Larry O’Brien Trophy on the back collar of James’ jersey. This banner was manufactured by Fusion Imaging of Salt Lake City, Utah.  It took 15 people, 300 hours to create, manufacture, and install the banner. 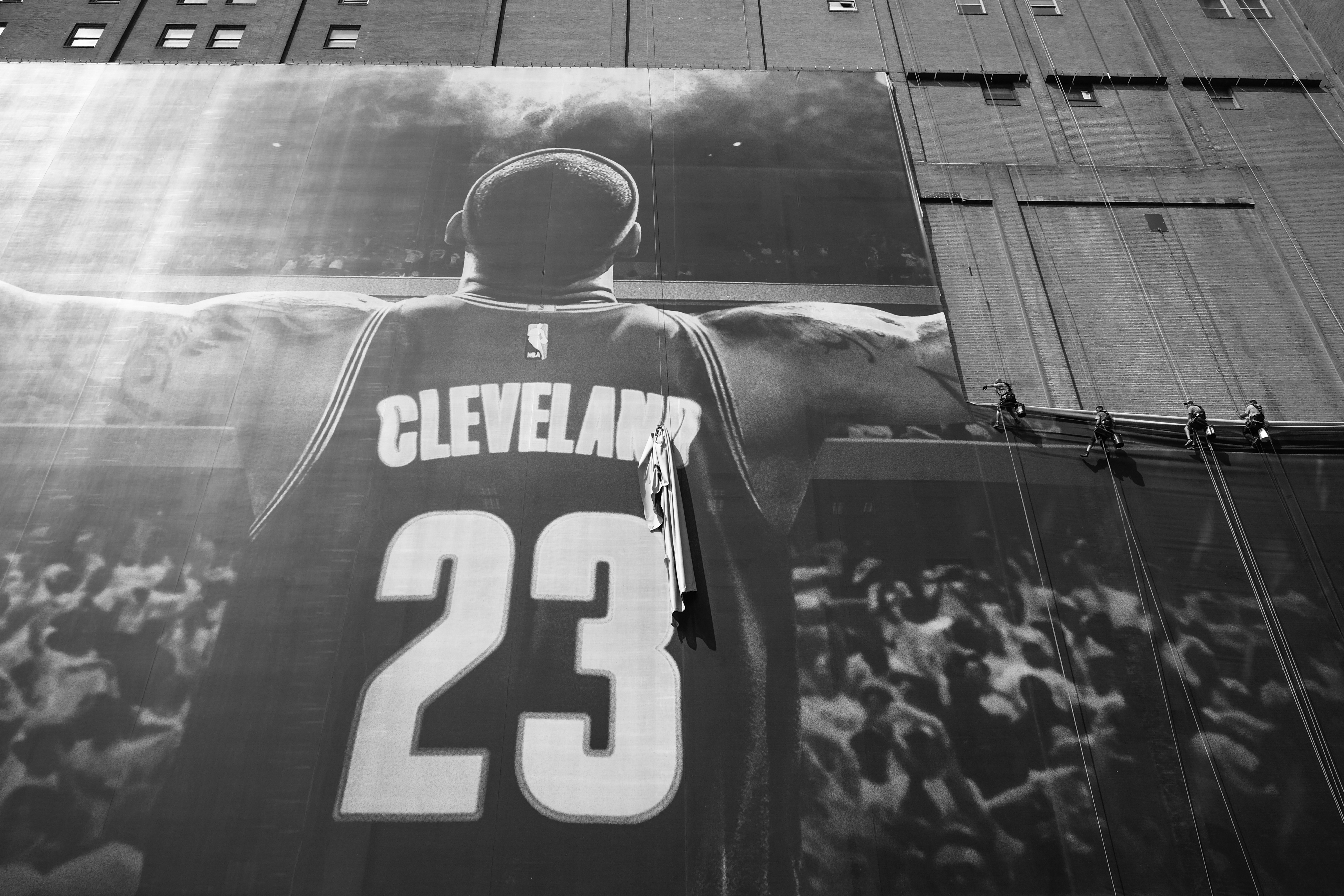