The MASONS, members of the secret fraternal order of Free and Accepted Masons, organized their first lodge in Cleveland in 1811. Chartered as Concord Lodge No. 15, for several years it met in the "long rooms" of various taverns, including the one owned by LORENZO CARTER, himself a Mason. Of 9 village officers elected in 1815, 5 were Masons, including Judge JAS. KINGSBURY. The charter of the Concord Lodge was allowed to lapse in the 1830s because of anti-Masonic sentiment prevalent throughout the country, but Webb Chap. No. 14 was organized in 1836, and Cleveland City Lodge No. 15, "Old 15," was formed in Sept. 1841. As Cleveland's population grew, other lodges formed in the city and its surrounding communities. The city's first Scottish Rite lodge was founded in 1859. In 1883 the first Masonic Temple was built on Superior Ave. and E. 6th. For many years it was primarily used by 4 Masonic bodies—Webb Chap. No. 14, Iris Lodge No. 229, the Cleveland Council, and the Oriental Commandery. In 1919 Scottish Rite bodies and the Shrine (composed of 32nd-degree Scottish Rite Masons or Knights Templar) built the Masonic Auditorium on EUCLID AVE. at E. 36th St., which since its opening has served as the central facility for area Masons. 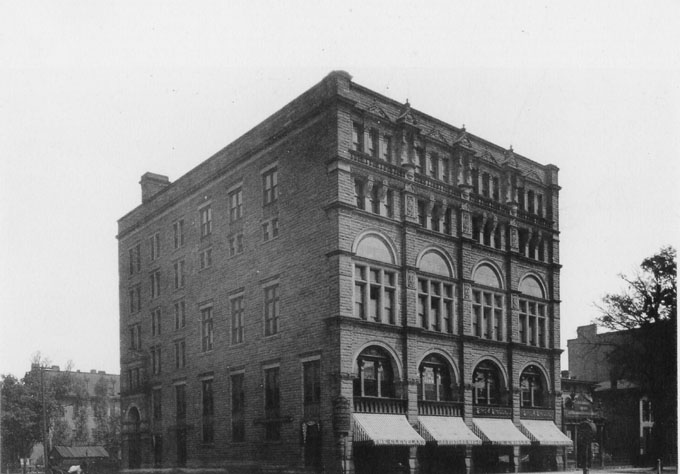 Cleveland's First Masonic Temple as it appeared in the 1880s. WRHS.

By 1934 there were 51 lodges of Free & Accepted Masons in Cuyahoga County, as well as 21 Royal Arch chapters, 5 councils, and 7 commanderies of the Knights Templar and Consistory. There were also 33 chapters of the Eastern Star, the women's auxiliary body, as well as the Grotto (composed of Master Masons) and the Shrine. Among Cleveland's more specialized lodges were Concordia Lodge No. 345, which conducted services in German, and Service Lodge No. 658, exclusively for war veterans. Black masons formed several lodges, one of the oldest of which is El Hasa Temple No. 28 of the Prince Hall Shriners. Since WORLD WAR II, 2 of Cleveland's most valuable Masonic bodies have been the Al Sirat Grotto and the Al Koran Shrine. In 1947 the Al Sirat Grotto was the largest grotto in the U.S., with 7,100 members. The grotto mainly serves as a social organization for Master Masons, but it is also known for its support of benevolence, including homes for crippled children. The Al Koran Shrine is the 4th-oldest shrine in the U.S. Over the years, it has been publicly known for its parade and musical units, as well as for its public services. The Al Koran Mosque, 3443 Euclid Ave., was completed in 1968 and has served as a hub for Shriners throughout northern Ohio. In 1972 there were 38,000 Masons in District No. 22 (Lorain and Cuyahoga counties), down from 42,891 in 1962. In 1993 there were 11 Masonic temples in the Cleveland area—in BROOKLYN, LAKEWOOD, LYNDHURST, N. OLMSTED, SHAKER HTS., and STRONGSVILLE, and in Cleveland on Lorain Ave., Kinsman, State Rd., and Franklin Blvd., as well as the Masonic Temple on Euclid Ave.