The MOSES CLEAVELAND STATUE, erected in 1888 in honor of the 92nd birthday of the city's founding, dominates the southwest quadrant of PUBLIC SQUARE. Erected at a cost of $4,378 by the EARLY SETTLERS ASSN. OF THE WESTERN RESERVE, whose members trace their heritage to pioneers of Cleveland, the statue was sculpted by James C. Hamilton. The Moses Cleaveland Statue It shows Gen. Cleaveland dressed as a surveyor, with Jacob's staff in his right hand and a compass in his left. The monument is 7'10" high and rests on a circular pedestal 7' high. Before casting the statue in bronze, the artist presented a plaster representation to the CLEVELAND CITY COUNCIL that was rejected because it was too tall. After a section was removed from Cleaveland's midriff and the halves were rejoined, Hamilton's work was accepted and cast in one piece, weighing 1,450 lbs. The statue was installed in the Square in a gala ceremony on 22 July 1888. The Early Settlers Assn., accompanied by the CLEVELAND GRAYS, the Guard of Honor, marched from the Music Hall to Public Square for the unveiling. A program followed in the Music Hall, featuring an address by Samuel E. Adams. The statue has withstood Public Square renovations, attempts to move it to UNIV. CIRCLE, and even rats in the base, remaining a proud symbol of Cleveland throughout its history. 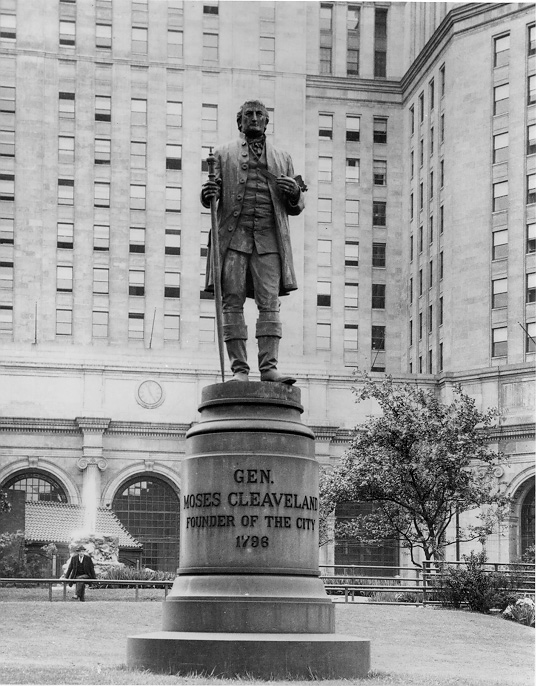