MURAL ART IN CLEVELAND. Throughout most of the 20th century public art in the popular mind meant murals. After 1890 literally hundreds of murals were created for Cleveland's public buildings and businesses. Murals are a hybrid art form combining elements of fine art, illustration, and interior decoration, but for the discussion here a mural is any publicly accessible, two-dimensional art work designed for a specific architectural context. 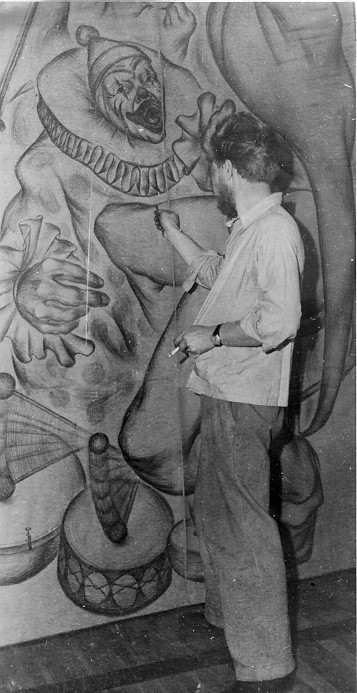 Almost all mural work done in the city before ca. 1920 was done by artists from outside the city, usually from either England or New York. In 1890 the Society for Savings constructed a new building on PUBLIC SQUARE and engaged the English illustrator Walter Crane to paint two murals for the main banking room. Crane was a distinguished member of William Morris's circle, and his paintings of fables having to do with money remain among the city's most important and earliest surviving murals.

As the city strove to become a cultural as well as industrial center many grand public buildings were constructed as part of the downtown "group plan" and murals were to be major design components of all of them. In the first group plan building finished, the Federal Bldg. on Public Square (1910), there were 41 mural panels dominating all the major spaces in the building. These paintings were done by muralists such as Edwin Blashfield, Kenyon Cox, and Francis Millet: all established East Coast artists. Almost all mural painting in this period was essentially allegorical and academic, i.e., its intent was to represent civic virtues using heroic mythological figures painted in a style derived from a European academic interpretation of classical sources. Cox's painting for the custom house in the Federal Bldg. is typical; Commerce, represented by Mercury, pours coins into the lap of a crowned figure that is the City of Cleveland itself.

Academic muralists also used historical events as didactic tools, such as Violet Oakley's depiction of the Constitutional Convention for the County Court House in 1912. Mural painting was one career in which it was possible for women such as Oakley to work creatively at a high level in a public forum. One of the most critically acclaimed muralists in Cleveland in the 1920s and one of the first local artists able to win major commissions was also a woman: Cora Millet Holden. She had a solid European academic training as an artist and a close working relationship with the local architectural firm of WALKER AND WEEKS, creating murals for many of their buildings in the city, such as the FEDERAL RESERVE BANK OF CLEVELAND (1923), Allen Medical Library (see CLEVELAND HEALTH SCIENCES LIBRARY) (1927), and Board of Education (1931). The close and early collaboration of muralists and architects was an important aspect of design through the first quarter of the century. Holden was also the apogee of academic style; the four allegorical panels in the Pearl St. Savings and Trust (1929) typify the sort of mannerism that would define reactions against academic art in the 1930s.

Another decorative and less academic mural style began to develop during the 1920s, and Cleveland saw one of its earliest and most influential examples in James Daugherty's series of murals finished in 1920 depicting "The Four Continents" for the Loew's State Theater. These murals by Daugherty (who was another East Coast artist) were colorful depictions of popular culture and influenced jazz-age movie palaces all over the nation.

By 1933, after 4 years of economic depression many Cleveland artists had run out of means to make their own living. Mural painting was already well established in the city when the New Deal programs of the 1930s would dramatically expand, and bureaucratize, the number of local artists involved. CLEVELAND MUSEUM OF ART director WILLIAM MILLIKEN helped the city become a regional administrative center for federal art projects. One direct effect of these various projects was that many local artists who had never before done murals were now given the opportunity, such as WILLIAM SOMMER's panels for the PUBLIC AUDITORIUM and the Main Library (see CLEVELAND PUBLIC LIBRARY) in 1934. Quickly a mural style different from that of the academics evolved among the city's artists, using bright, flattened areas of color, simplified shapes, the creation of visual space by means other than classical perspective, and subject matter that was almost always locally derived and realistic. Cooperation among artists was encouraged, leading to a consistent "Cleveland Style" in mural painting (along with the fact that the majority of local artists had been trained at the Cleveland School of Art). While not dramatically distinct from other regional styles popping up outside the mainstream art world of New York, it was one very much focused on local Cleveland imagery and the city's perceived art needs.

Between 1933 and 1943 hundreds of Cleveland artists would be paid to work in all media through 4 federal programs. Each of the programs produced murals which soon were to be found in dozens of schools, branch libraries, and housing projects, as well as the new Post Office (for a more complete discussion of federal art projects see Federal Art in Cleveland 1933-1943, Karal Marling). In 1937 murals were commissioned for the LAKEVIEW TERRACE housing projects and other Cleveland Metropolitan Housing Authority Sites. One of the project's experimental goals was to affect the behavior of the low income residents through good design and exposure to culture. Earl Neff completed several murals for the nursery, including a dynamic representation of the Iroquois story of how the bear lost his tail. Neff said of his work that "he hoped it would stimulate literary interest in children leading them to be better citizens, a more important goal than painting for artistic effect alone." Such didactic concerns among artists were a major theme throughout the 1930s.

The New Deal mural projects did succeed in allowing artists to survive and to train a new generation of artists, many of whom would go beyond mural work after WORLD WAR II. African American artists such as Elmer Brown or Charles Sallee, who painted a mural for the Outhwaite housing project in 1940 depicting families fleeing the city's slums for new homes, were given their start during federal art programs; Sallee would go on to be one of Cleveland's most prominent interior designers.

Beyond federal programs, the 1930s saw the introduction of many new techniques in mural work. The huge enamel mural created at the FERRO CORP. for the 1939 New York World's Fair Transportation Bldg. (and later installed in the concourse of the Terminal Tower) after a design by John Scott Williams of New York, used traditional allegorical mural imagery with cutting-edge coatings technology. GLENN SHAW headed the Mural Department at the CLEVELAND INSTITUTE OF ART between 1937 and 1957, after having been on the faculty since 1922; he was responsible for training several generations of local muralists. Shaw adhered to an illustrational realism, such as in his depictions of Shaker villages in a series of east side murals for the Shaker Savings Assn. in the 1950s. For his students however, attitudes about mural painting had changed; bauhaus functionalism had made murals extraneous, while critical reappraisals of the New Deal paintings made them seem dated. Murals ceased to be a prestige art form as ambitious students pursued painting.

Mural painting in Cleveland after World War II was dominated by 2 Hungarian American artists from New York: Andrew Karoly and Louis Szanto. The pair mainly worked through the SHAKER SQUARE-based Irvin and Gormley Co. interior decorators, and they painted over 30 murals for local businesses. The pair's biggest client was the Society for Savings, for whom they did work in at least a dozen branches during the 1950s and early 1960s, as well as 2 new murals in the style of Walter Crane for the enlarged lobby of the main office on Public Square in 1948.

In the 1960s mural painting faded from view, often literally, as many extant examples around the city fell into disrepair, were removed, covered or simply destroyed. Fifteen murals were destroyed, including one by Sallee, when the Buhrer School was razed to make way for I-71 on the near west side. However, in the 1970s there was a strong renewal of interest in new mural work sparked by community activism and new ideas about taking fine art movements out of museums and on to the streets. The City Canvases program of the early 1970s sought to place large-scale art on the blank exterior walls of downtown buildings as a way to renew a city that felt blighted. A dozen murals were created by local artists based on op-art, Pop art and Neo Geo designs such as Mort Epstein's huge electric outlet (1974) on the side of the Union building on Euclid Ave., and Susan Todys and Jody Trivison's op-art mural at 18th St. and St. Clair (1973). These murals were meant to be lighthearted, but the subtle behavioralism of Neff's time had yet to leave mural painting. Jan van der Meulen (CLEVELAND STATE UNIV. art chair) commented on plans in 1976 for more downtown murals that it was "art to create optical excitement that will lift the spirits of the citizens."

At the same time, groups all over the city were using mural painting to build community, display ethnic pride, or address political issues. In this new generation of murals, often painted by members of the community, earlier goals of developing Cleveland's virtue as a place were focused at the level of individual ethnic groups or neighborhoods in the city. One of dozens of examples would be the mural "People's Painting," designed by Charles Rosenburg and executed by the primarily Puerto Rican community along Lorain Ave. at W. 29th St. during the summer of 1975.

In the 1980s and 1990s the institutionalization of "public art" placed mural-type works for public spaces within the jurisdiction of mainstream fine art ideas, which were diverse and individualistic, but also firmly wedded to work done for exhibit in art institutions. Don Harvey's work "The Habitat We Share" a "percent for art" public art project for the W. 25th St. Rapid Station in 1993 continued several themes that had been constant through the century. Its focus is on local subject matter (the coexistence of people and nature along the Cuyahoga River), and it seeks to imbue the viewer with a sense of place in the larger cultural and environmental context of the city. But unlike the allegorical murals of the first quarter of the century, which were filled with certainty and commercial optimism, "The Habitat We Share" presents its viewers with questions. Another difference is that Harvey had no contact with the architect of the rapid station; murals had been the confluence of art and architecture, but after World War II art and architecture became increasingly separate.

In the 1990s there was also some revival of interest in historic murals, and several that were in danger of being lost were moved to new locations and restored. The Ferro Corp. mural was moved from the Terminal Tower to the WESTERN RESERVE HISTORICAL SOCIETY; several Karoly and Szanto murals were relocated after nearly being razed with the buildings they were in, such as one moved to the LAKEWOOD City Hall Auditorium. However, a more fluid economy that prefers portable art, and changes in taste continued to endanger many of the city's century-long cultural legacy of murals.