OTTO MOSER'S, one of Cleveland's best known restaurants, was located for just over a century at 2044 E. 4th St. before moving to PLAYHOUSE SQUARE. According to the most reliable sources, the restaurant was founded by Otto F. Moser in 1893. At that date, E. 4th St. (then called Sheriff St.) was at the center of Cleveland's theatrical district, which boasted four legitimate theaters, two burlesque houses, and one vaudeville theater. The famed EUCLID AVE. OPERA HOUSE had its stage doors directly opposite Moser's front door.

Otto Moser's was frequented by many stage personalities over the years, including W. C. Fields, Lillian Russell, George M. Cohan, and others. Moser collected their autographed portraits, which were framed and hung on the walls of the restaurant, creating an ambiance that would come to characterize the establishment. The removal of the neighboring theaters to Playhouse Square in the 1920s altered the character and makeup of the neighborhood, but the restaurant remained largely unchanged until Otto Moser's death in 1942. 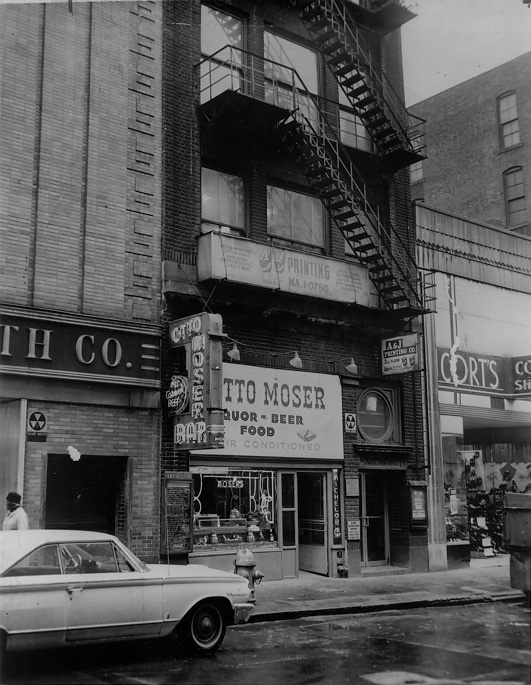 The faces of Otto Moser's Bar on East 4th St., a favorite of the theater-going crowd, as it looked in the mid-1960s. Cleveland Press Collection, CSU Archives.

Two of Moser's longtime employees-Max A. Joseph and Max B. Joseph-owned the restaurant in the 1950s and 1960s. The pair made some minor changes, but the restaurant maintained its relationship with show business celebrities and regularly closed its doors to the public, and opened only for performers for a few nights while the Metropolitan Opera was in town. In the mid-1970s, a second location opened briefly in downtown Cleveland's Park Center. Otto Moser's changed hands again when the restaurant was purchased by Dan Bir and Steve Dimotsis in 1977.

Business continued to decline around the E 4th St. location and the successful renovations in the Playhouse Square district, renewed Bir and Dimotsis' desire to be near the theater district. After a seventy-plus year separation from the heart of the city's thriving theater district, the restaurant- with its 1,200 autographs pictures, six mounted animal heads (including a moose named Bullwinkle), and waitress Norma Bunner (who came to work at the restaurant in 1955) - moved to the Bulkley Bldg. (1425 Euclid) at Playhouse Square early in 1994. The new location was nearly three times the size of the original, and the relocation soon proved to be a resounding success. Within a few weeks of opening, Dimotsis told the PLAIN DEALER that they were serving crowds in a single seating that outnumbered an entire day's traffic in the old location. By 2004, Otto Moser's continued to serve lunch - during the week overseen by Norma Bunner who was then going on her fiftieth-year at the restaurant - and dinner to theatergoers, entertainers, downtown residents, and tourists.

Otto Moser’s closed in 2018 after 125 years of service in Cleveland. The restaurant was replaced by Republic Food and Drink in 2019 which displays many of the original signed photographs from Otto Moser’s.