PFLAG CLEVELAND is a support group for LGBTQ people, their parents, families, and friends that was founded in 1985 by Jane Daroff, a licensed clinical social worker, and Jes Sellers, a licensed psychologist.  PFLAG Cleveland is a local chapter of the national organization Parents, Families and Friends of Lesbians and Gays which was founded in 1973 and incorporated as a non-profit in 1981. Daroff was encouraged to form the local chapter by her husband, Dr. Robert Daroff and their experiences with their own gay son which showed them the lack of available resources in Cleveland for family members in need of support regarding LGBTQ family members. The organization is governed by an advisory board that facilitates education and advocacy in the Greater Cleveland area. Since its founding, PFLAG Cleveland has held regular monthly support group meetings where participants are able to engage in dialogue about sexual orientation and gender identity in order to build understanding and acceptance. 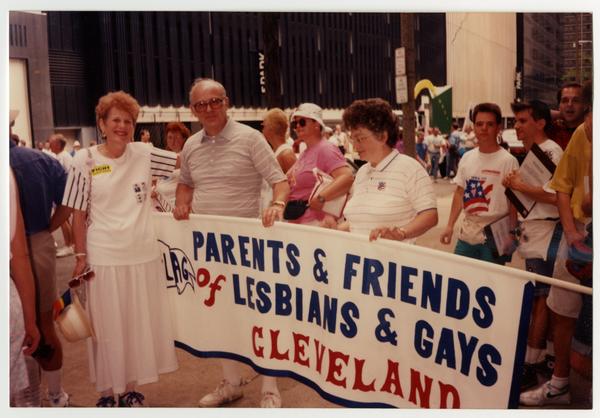 Members of PFLAG Cleveland, including Jane and Robert Daroff, holding a banner for the organization at Cleveland Pride in 1991.

PFLAG Cleveland also works with other LGBTQ organizations in the area. In 1997, PFLAG Cleveland joined  the Gay, Lesbian and Straight Education Network of Cleveland, the LESBIAN/GAY COMMUNITY SERVICE CENTER OF GREATER CLEVELAND, and later TRANSFAMILY OF CLEVELAND, on the the Safe Schools are for Everyone (SSAFE) in order to increase tolerance and acceptance of LGBT people in regional public schools. Today, the organization publishes a monthly newsletter as a joint effort with PFLAG Akron that contains news concerning LGBTQ issues and information about events in Northeast Ohio. PFLAG Cleveland also maintains a close relationship with the LGBT Center of Greater Cleveland. On June 1, 2022, the organization announced that it had entered a new partnership with the Center in order to enhance the provision of resources and support services to LGBTQ people and their families in the region. The LGBT Center will begin to support the administrative tasks of PFLAG Cleveland, allowing it to focus on its support group meetings and other activities central to the organization’s mission.