The PHILLIS WHEATLEY ASSOCIATION was established in 1911 in Cleveland as the Working Girls Home Association by JANE EDNA HARRIS HUNTER. Hunter created the Phillis Wheatley Association to house and help unmarried African American women and girls, newcomers to the North often preyed upon by unscrupulous employers or agencies. With $1,500, she first opened the Working Girls Home Association, a boarding home for 10 women at East 40th, north of Central Avenue. Later that year, a 2-story building at 2265 East 40th Street was purchased and the name changed to the Phillis Wheatley Association, in honor of a late 18th-century Boston slave considered the first African American poet. The number of residents soon strained the capacity of the 23-room house. By 1917 the association purchased a 3-story building to house 75 at the northwest corner of East 40th and Central. An adjoining building, purchased in 1919, housed social and educational activities and the Stephen School of Music. The home provided a wholesome atmosphere and vocational training, often teaching service skills. 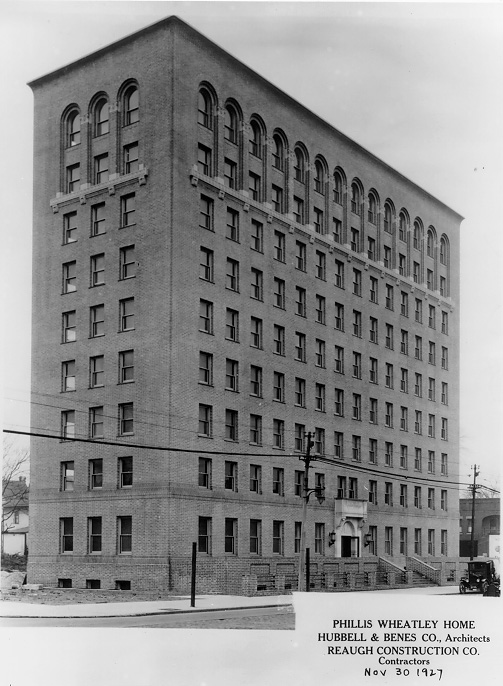 Hunter faced opposition from many AFRICAN AMERICANS who objected to the segregated institution, a so-called "jim crow hotel for black girls," but she won the approval of some black ministers. However, Hunter secured broad financial backing only through concessions to whites. She persuaded Henry Sherwin, of SHERWIN-WILLIAMS, to contribute but had to accept his condition that prominent white WOMEN be named to the board. Black leaders, including Hunter, realized that the Phillis Wheatley, by providing a black alternative, helped maintain a white-only YOUNG WOMEN'S CHRISTIAN ASSOCIATION (YWCA). Keeping in mind the greater goal of a refuge for black migrants, Hunter secured contributions from whites. In 1927, with substantial support, the association built a new 9-story building at 4450 Cedar Avenue. As earlier debates subsided, the Phillis Wheatley Association was seen as an exemplary self-help organization that permitted young girls to maintain both heritage and self-respect. With a diminished need for group housing after the 1950s, the association concentrated on recreation and cultural programs, and added daycare and neighborhood outreach.

A member of the GREATER CLEVELAND NEIGHBORHOOD CENTERS ASSOCIATION, the Phillis Wheatley Association has functioned as a multiservice community center, serving the needs of children, youth, families, and the elderly. The association provided neighborhood social services and operated a 56-unit apartment building for seniors and disabled persons. It also managed the Sutphen School of Music, which provided music classes, and Camp Mueller in the CUYAHOGA VALLEY NATIONAL PARK, which offered a pastoral respite for urban children.

In 2009, Thomas V. Harrington served as the chairman of the Phillis Wheatley Association and Jacquelyn Bradshaw served as the executive director of the organization. The association annually hosted an after-work jazz concert to raise funds for the Sutphen School of Music and a Christmas Jubilee to benefit local families in need.