The second PRESIDENTIAL DEBATE OF 1980 between Democratic Pres. Jimmy Carter and Republican presidential candidate Ronald Reagan was held in Cleveland on 28 Oct. 1980, sponsored by the LEAGUE OF WOMEN VOTERS. Second Presidential Debate of 1980 The Cleveland Chapter of the league, led by Pres. Mildred Madison and Grace Kudukis, public-relations spokesperson, together with the CLEVELAND PRESS, the Cleveland Convention Bureau, and the GREATER CLEVELAND GROWTH ASSN., worked actively to insure that Cleveland would host the nationally televised debate, and Cleveland civic leaders raised approximately $193,000 to cover the expenses. The 90-minute debate, held in the Music Hall at the Cleveland Convention Ctr., proceeded without incident as the candidates answered questions posed by the panel, made up of Harry Ellis of the Christian Science Monitor, Wm. Hilliard of the Portland Oregonian, Barbara Walters of ABC News, and Marvin Stone of U.S. News & World Report, with Howard K. Smith as moderator. Press analysts indicated there had been no clear winner, but in answering questions on domestic and foreign policy, Carter focused on detail, while Reagan had a relaxed and genial style. 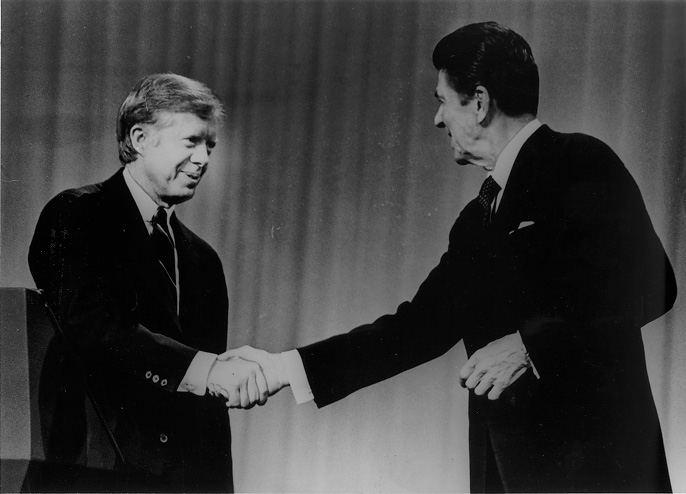