The REPUBLICAN NATIONAL CONVENTION OF 1936 was held 9-12 June to nominate Republican party presidential and vice-presidential candidates for the 1936 election. Cleveland was chosen by the Republican Natl. Committee when Congressman CHESTER CASTLE BOLTON persuaded Cleveland civic organizations and businessmen to raise $150,000 to underwrite convention expenses. PUBLIC AUDITORIUM was renovated to accommodate the equipment and wiring necessary for broadcasting the event, and major speeches were scheduled for the late evening hours so that radio network programming would not be preempted. The city hosted about 13,000 visitors, including 1,001 delegates, their alternates, campaign workers, reporters, and committeemen. 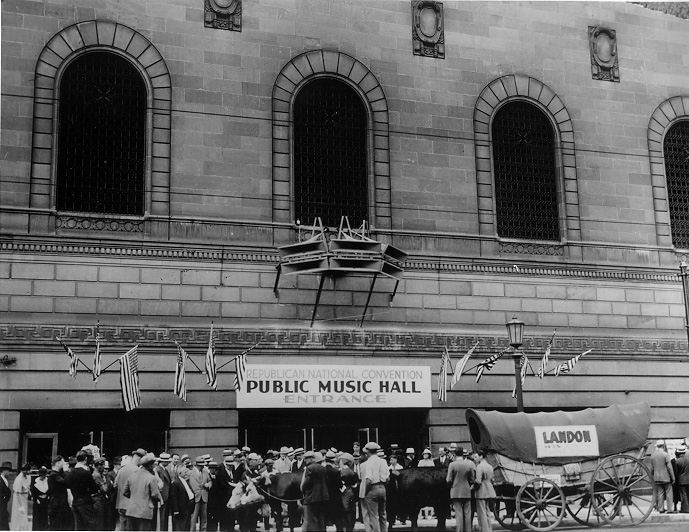 Spectators crowd around the Alf Landon Bandwagon in front of Public Hall at the 1936 GOP Convention. CPL.

The convention began 9 June with Oregon Sen. Frederick Stiewer as the keynote speaker. On the second day Herbert Hoover delivered an address, and on the third day Kansas governor Alfred Landon was nominated for president on the first ballot, with Col. Frank Knox from Illinois nominated vice-president the following day. Landon stayed in Kansas throughout the proceedings, although he was in constant telephone contact with his supporters here. The Republican platform promised to speed up employment and maintain relief, but wanted relief responsibility returned to nonpolitical local agencies. It also favored a reduction in government expenses and the removal of production quotas contained in the National Recovery Administration and Agricultural Adjustment Act.