The RITE AID CLEVELAND MARATHON AND 10K (actually a 26-mile annual marathon and a separate 10-km run) was originally sponsored by the REVCO DRUG STORE chain and cosponsored by various Cleveland-area companies. In late 1997, Revco was acquired by RI-based CVS Corp., which sponsored the race from 1998 through 2002. Beginning in 2003, sponsorship was taken over by PA-based Rite Aid Corp.

Considered one of the major races for runners in the country, the first Revco-Western Reserve Marathon was held in Hudson in May 1976 and attracted only 250 runners. When the race moved to Cleveland in May 1978, the number of participants increased, and in the 1990s the race was ranked among the top 25 road races in the nation by Runner's World magazine. The fast and relatively flat marathon course begins and ends on EUCLID AVE. at CLEVELAND STATE UNIV., with the route going through PUBLIC SQUARE, turning east on Superior to E. 46th St. and back to St. Clair, over the DETROIT-SUPERIOR BRIDGE, following Detroit Ave. to Lake Ave. through LAKEWOOD and to a turnaround in ROCKY RIVER. By 1995 there were more than 4,500 participants annually from more than 40 states and 20 countries. Tom Fleming won the first men's marathon and Kim Merrit the women's marathon in 1978. 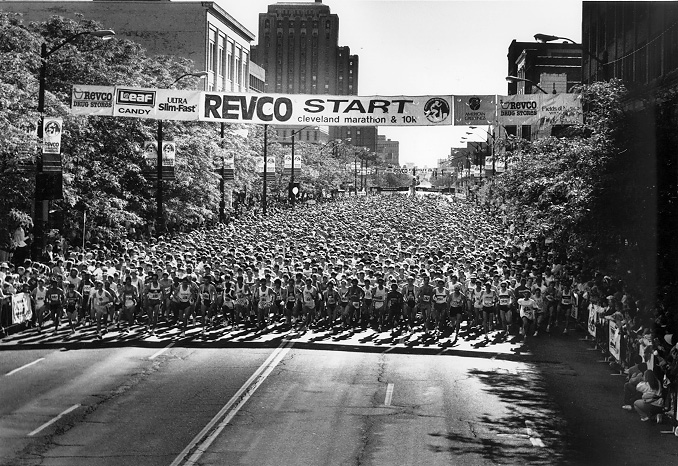 The 10K follows the first leg of the marathon course through Public Square, east on Superior, turning north on E. 46th St., returning to Public Square via St. Clair, and then heading east on Euclid Ave. to the finish line. Participants in all races are classified into 7 age groups, ranging from those 14 and under to those 60 and above. Even more popular than the marathon, the 10K attracted over 9,000 runners in 1995. Winners in various classes receive a wreath of laurels and a gold medallion. The total purse for the marathon and 10K exceeded $150,000 in 1995, making it one of the richest events in racing. A wheelchair marathon, the MetroHealth Challenge, became part of the marathon/10K in 1987 and there now is a "Kids' Run" with distance events ranging from 50 yards to .5 mile, depending on the age group.