ROCK 'N' ROLL. Through a series of interesting personalities and promotions, rock 'n' roll was invented in Cleveland in the early 1950s. In the late 1940s, LEO MINTZ, the owner of Record Rendezvous, saw the decrease in sales of big band records. Mintz, however, saw how his young customers would dance around his store when the manager played Rhythm & Blues (R&B) records. In order to eliminate the racial tone of this music from the deep south, he called it rock & roll. The term "rock 'n' roll" had been used since the early 1920s as a blues song lyric meaning sexual intercourse. Mintz tried to get airplay for R&B records, but the 6 radio stations in Cleveland played only music by white musicians. 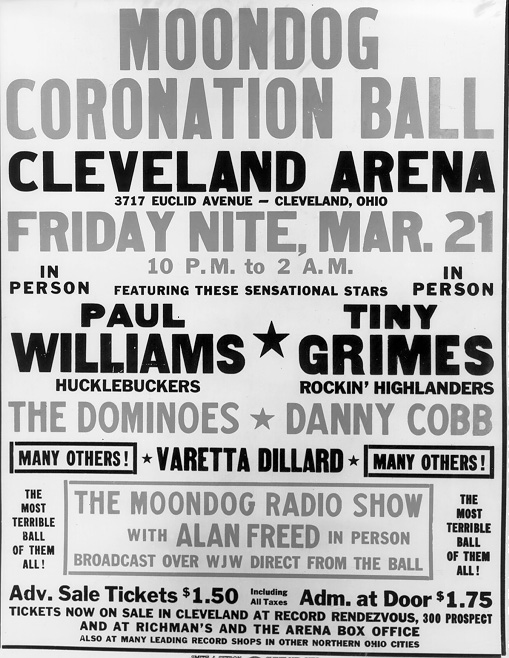 Mintz finally met a young, brash disc jockey from WAKR-AM in Akron, ALAN FREED. Freed was impressed with Mintz's customers' reaction to rock 'n' roll and began playing a rock 'n' roll record on his afternoon show as a novelty song sometime in early 1949. Freed and Mintz became good friends. Freed entered the Cleveland market in April 1950, when he became the host of an afternoon movie program at WXEL-TV (Ch. 9).

With the sponsorship of Record Rendezvous, Freed started at WJW-AM in July 1951. His 11:15 P.M. to 2 A.M. radio program, "The Moondog Rock & Roll House Party," started as a mixture of popular hits and R&B records. With Leo Mintz sitting in the studio at his side, handing him records, the music mix evolved into the first rock 'n' roll radio format. Although disc jockeys across the country were playing R&B records on the radio, Freed was the only one calling it rock 'n' roll. Freed's radio style, howling and yelling "rock & roll," while pounding on a telephone book, his wit and his ambition were the sparks that fueled his popularity with the teens in the black neighborhoods. They were attracted to the music, but it was Freed's Moondog persona that created a very loyal audience, the Moondoggers.

After several months at WJW, Freed began promoting dances that featured the R&B bands he played on his radio show. After a few events, with promoter Booker Brooks, Freed formed a partnership with Lew Platt. After a few dances in Akron, Canton, and Vermillion, they promoted a large show at the ARENA on 21 Mar. 1952. Advertised as "the most terrible ball of them all," the event was called the "Moondog Coronation Ball" because Freed intended to crown himself the "King of the Moondoggers." The show featured Paul Williams & The Hucklebuckers, Tiny Grimes & The Rockin' Highlanders, the Dominoes, Danny Cobb, and Varetta Dilliard.

Neither Freed or the Arena staff were prepared for the large crowd that showed up the night of the concert. After admitting the capacity of the hall, there were still thousands outside waiting to get in. When the music started, the huge crowd outside broke down the Arena doors. Inside, fighting broke out in the audience and the concert ended after the first song. It took the CLEVELAND POLICE and the CLEVELAND FIRE DEPARTMENT several hours to clear the Arena and to stop the fighting. City Council immediately passed an ordinance making it illegal to oversell the capacity of a public building. Despite Freed's denial that the show was oversold, he was accused of exposing his young audience to danger. The local newspapers gave the incident front page coverage and the wire service spread the story around the world. Suddenly, the press was talking about rock 'n' roll and its evils.

Freed's popularity soared after the Moondog Ball. Both his radio program and his concert business thrived. Freed moved to WINS-AM in New York City on 15 Aug. 1954. His success on the radio and in the concert business would make rock 'n' roll a household word. In 1959 Freed was indicted on payola charges by an FTC congressional committee. Freed died broke in 1964.

Jane Scott of the PLAIN DEALER was the first established rock writer when she began a teen music column in 1962. The CLEVELAND PRESS followed with writers Judy Prusnek, Bruno Bornino, and Harriet Peters. Independent entertainment papers like the Great Swamp Erie da da Boom, After Dark, and The Scene followed.

Freed was forgotten until 1971, when English writer Charlie Gillett published his book The Sound of the City—The Rise of Rock & Roll. With a perspective of 15 years, Gillett credited Freed's role in starting rock 'n' roll and saw the Moondog Coronation Ball as the beginning of rock 'n' roll. In 1972 WMMS program director, Billy Bass, coined the phrase "Cleveland—The Rock 'n' Roll Capital of the World."

In the mid-1980s, disc jockey Norm N. Nite used Freed's Cleveland activities and the Moondog Coronation Ball to rally public and civic support to bring the ROCK AND ROLL HALL OF FAME AND MUSEUM to Cleveland. The museum, located on the lakefront, opened to the public in Sept. 1995.