The ROXY THEATER was the best-known burlesque house in Cleveland. Its roots date from 1906, when Truman M. Swetland leased the property, located at 1882 E. 9th St., from Levi E. Meachum for 99 years. In 1907 the Family Theater opened at that location. A movie house by 1909, it was renamed the Orpheum Theater in 1913 and, following a 2-yr. shutdown, the Roxy in 1931. By 1933, under new owner Geo. Young, the Roxy became a nationally known burlesque house.

Throughout its heyday, the Roxy was a stop for entertainers such as Abbott & Costello, Phil Silvers, Red Buttons, Ann Corio, and later, Tempest Storm and Blaze Starr. The theater was remodeled in 1956 by new owners Frank Engel and Frank Bryan, and they brought their Eastern Burlesque circuit to Cleveland. From 1968 until its final closing and razing in 1977, the Roxy alternated between live entertainment and X-rated movies. The theater and property were sold in 1971 to Kope Realty for $150,000. In Sept. 1972 the lobby of the theater was bombed, but the Roxy reopened in Feb. 1973, showing X-rated films. Later that year, manager Tommy Flynn was arrested on obscenity charges for showing "Behind the Green Door." The Roxy closed permanently on 6 Nov. 1977. Although the theater was razed to make way for the Natl. City Ctr. (now PNC Bank), its name was perpetuated in the Roxy Bar & Grill, which has since closed. 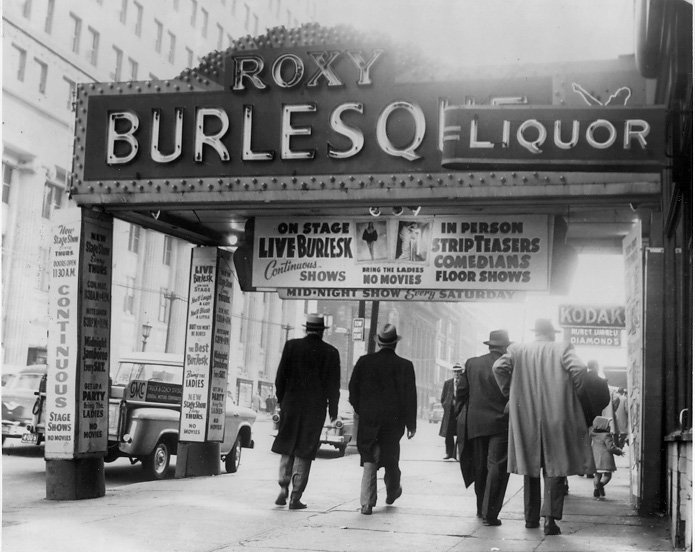