Maurice Reedus Jr. was born around Quincy Avenue in Cleveland, Ohio, to Merle Reedus and Maurice Reedus Sr.  For 35 years, his father played saxophone with the legendary blues guitarist, ROBERT LOCKWOOD JR, which would prove formative for young Maurice. Although he played sax in the backing band for the Motown band Sly, Slick, and Wicked in the early 1970s, Reedus garnered his most acclaim as an iconic Cleveland street musician. 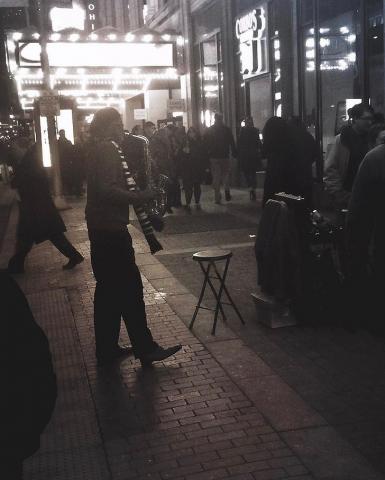 Reedus obtained the moniker of the “Sax Man” because of his consistent street performances, which he often did dressed in colorful red clothing.  He would frequently delight large crowds as they exited a stadium or arena after sporting events. Reedus could also be heard on the the sidewalks outside of the CLEVELAND PLAY HOUSE, where he regularly played for exiting theatergoers after the show.

His years of playing the saxophone on the streets of Cleveland made Reedus a popular public figure.  In 2014 he became the subject of a documentary film about his life and musical career.  The Sax Man, directed by Joe Siebert, was shown at the 2014 Cleveland International Film Festival. Reedus' influence and local fame prompted the Cleveland City Council to reconsider legislation that prohibited the kind of street performing for which he was so well known. The new legislation was named the Sax Man Legislation in his honor.

Maurice Reedus Jr. passed away at the age of 65 in Cleveland, Ohio.