SAENGERFESTS, national gatherings of GERMAN singing societies, were a major vehicle for the development of music in Cleveland. The first Saengerfest (Singing Festival) in Cleveland took place 28-30 May 1855; it was the 7th such event in America. The purpose of the Saengerfest was to exchange visits among the various German singing societies so they could hear one another and celebrate their German heritage. A total of 6 Saengerfests were held in Cleveland.

Hans Balatka, a resident of Milwaukee, was the conductor of the 1855 festival, in which a PUBLIC SQUARE concert was heard by 5,000-7,000 persons, described by the CLEVELAND LEADER as "the largest audience which has ever attended a concert in Cleveland." Indoor concerts were given in the buildings of the former CLEVELAND UNIV. in TREMONT.

A highlight of the 1874 (22-27 June) Saengerfest occurred when N. COE STEWART led a chorus of 1,500 boys and girls trained under his direction in the CLEVELAND PUBLIC SCHOOLS.

The 1893 Saengerfest featured the local PHILHARMONIC ORCHESTRA, under the baton of Clevelander EMIL RING. Special halls were constructed for the 1874 and 1893 festivals, the former seating 9,000 at a location on EUCLID AVE. at E. 40th St., and the latter accommodating at least as many on the southeast corner of E. 55th and Scovill Ave.

The second last Saengerfest (June 1927) held in Cleveland was the most spectacular. Under famed conductor Bruno Walter, the 36th Natl. Saengerfest (of the North American Saengerbund) hosted 100 societies and 4,000 singers. In addition, 2,000 schoolchildren drawn from Cleveland public schools sang under the direction of Russell V. Morgan. Their program featured works by Schubert. Some 12,000 people jammed Public Hall to hear the last concert, dedicated to Beethoven upon the centenary of his death. Walter and concertmaster Josepf Fuchs received a standing ovation for the prelude to Wagner's Die Meistersinger von Nürnberg; Lawrence Tibbett, baritone of the Metropolitan Opera, sang "In Mai," composed by former Clevelander ALBERT GEHRING.

A sixth Saengerfest was held in Cleveland in 1986. In addition to the national gatherings the city hosted state Saengerfests in 1981 and 1983. 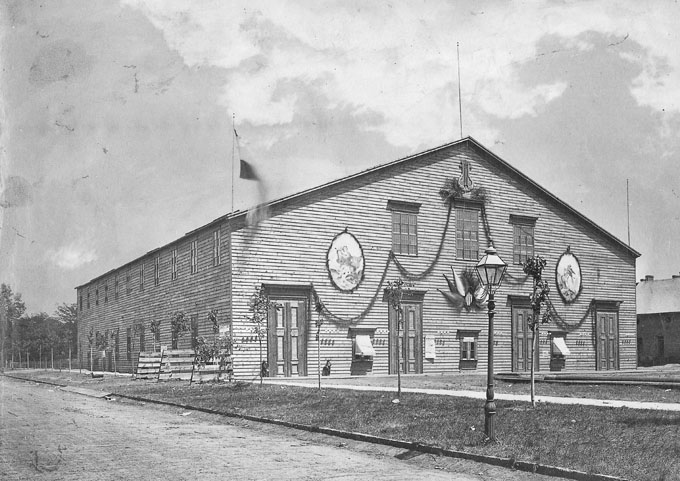 This large wooden hall was specially built and decorated for the German Saengerfest in Cleveland in 1874. WRHS.
Article Categories
Fine Arts and Literature