SEVERANCE HALL debuted as the home of the CLEVELAND ORCHESTRA 12 years after the latter's formation in 1918. Initially, the Orchestra had performed at Grays Armory and Masonic Auditorium. Underwritten by JOHN L. SEVERANCE as a memorial to his wife, Elisabeth Huntingdon DeWitt Severance (a large donation also came from DUDLEY S. BLOSSOM), Severance Hall was erected in 1930-31 following designs by the architectural firm of WALKER AND WEEKS. The entire project (building, endowments, furnishings, etc.) represented a $7 million investment, including about $2.6 million in construction costs. The land was proffered by Western Reserve University (now CASE WESTERN RESERVE UNIVERSITY) at a leasing cost of $1.00 per year.

As built, the structure contained a concert hall seating 1,844 people, a lower-level chamber-music hall seating 400, and a radio-broadcasting studio. On either side of the auditorium were triangular wings accessing a circulated area, a green room, a lounge, offices, and a library. Onstage were a cyclorama backdrop, a skydome for operatic productions, and a large E. M. Skinner pipe organ. A system of colored spotlights was operated by a clavilux ("color organ") for lighting effects. An underground motorcar portecochere allowed elite guests to be dropped off, with attendants available to park and retrieve cars. This area was closed in 1970, remodeled to include a restaurant in 1971, and further redesigned to create a lower-level lobby and additional offices in 1988. 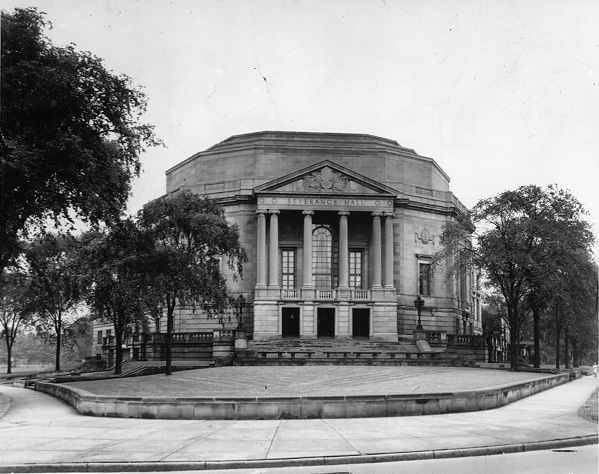 Severance Hall, home to the Cleveland Orchestra and the Musical Arts Association as seen from the corner of Euclid and East Boulevard in an undated photograph. WRHS.

The architecture of Severance Hall is a cross between the Georgian Neo-Classical style represented by the CLEVELAND MUSEUM OF ART across the Wade Park Lagoon and the Art Deco or Art Moderne style developed in the late 1920s. The main entrance is a Renaissance portico. The interior, however, is an eclectic mix. The elliptical 2-story grand foyer bespeaks a Neo-Egyptian design, while the auditorium is modern and traditional in its stylized ornament and color - featuring classical and Art Deco touches. The Reinberger (lower-level) Chamber Hall is 18th century in design.

Under the leadership of GEORGE SZELL, the performance area was redesigned in 1958. The original proscenium, velvet curtains, and much of the carpeting were removed. A permanent acoustical shell was built - colloquially called "the Szell Shell." What resulted was the more resonant, reflective sound that Szell preferred. Another modification occurred in 1994, Severance Hall began sharing access to a new underground garage with UNIVERSITY CIRCLE, INC. An entrance pavilion, accessible from the garage, was added at the same time.

Perhaps the most extensive update was launched in 1998 with a 2-year restoration and expansion led by architect David M. Schwarz. Highlights included the restoration and relocation of the Skinner organ, replacing the "Szell Shell" to recapture the Hall's original design and acoustics, and the addition of a street-level lobby and new restaurant.

Severance Hall was added to the National Register of Historic Places (as part of the Wade Park District) in 1982. The structure's architectural significance has also been recognized by a myriad of other organizations, including the Cleveland Landmarks Commission and the National Trust for Historic Preservation. Severance Hall's main auditorium currently has a seating capacity of about 2,000, while the lower-level Reinberger Chamber Hall seats 400.