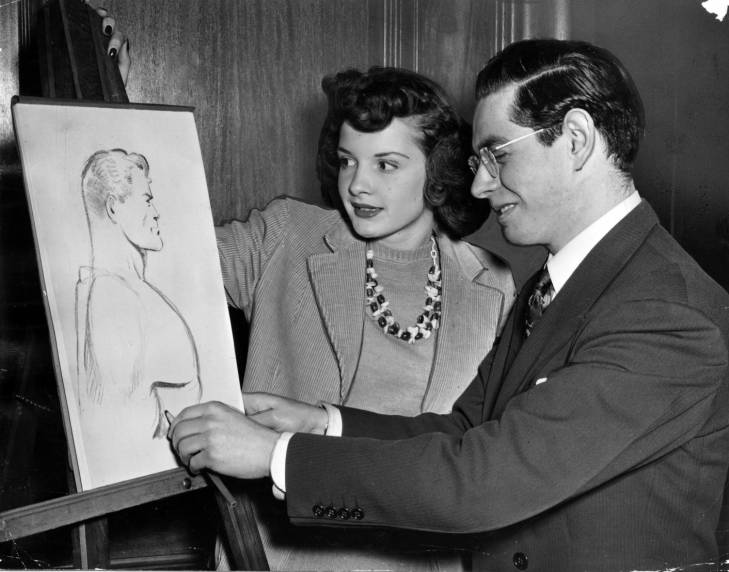 SHUSTER, JOSEPH (July 10, 1914 - July 30, 1992), was a comic book illustrator who co-created the DC Comics character SUPERMAN alongside his lifetime friend JEROME SIEGEL. Born in Toronto, Canada, a young Shuster was a newsboy at the Toronto Daily Star to help the family through difficult financial times. His parents, Julius and Ida Shuster (previously Shusterowitz), met in Russia and moved to Canada in order to leave behind widespread anti-semitic violence in Europe and pursue work. Struggling with rent, the family moved to Cleveland, Ohio in 1923 where the Richman Brothers clothing store factory offered the promise of economic security.

At age 14, Shuster enrolled at Alexander Hamilton Junior High School on the east side, where he regularly submitted short comics to the school newspaper, The Federalist. Shuster was captivated by comics, and would excitedly await his father’s return from work so the pair could read and trace the colorful images together. In 1929, another move and a new neighborhood prompted Shuster’s enrollment at Glenville High School. Quickly finding his niche, the aspiring illustrator met a like minded classmate, Jerome Spiegel, and the two became inseparable friends and efficient collaborators. Shuster’s drawings combined with Spiegel's passion for science fiction and writing became a popular mainstay of Glenville’s school publication, The Glenville Torch. Equally ambitious creators, the two were consistently selling comics to National Allied Publications by 1935.

The origins of Shuster and Siegel’s most explosive success began with a humble 1933 short story titled “The Reign of the Superman” within Siegel’s self-published magazine Science Fiction. Originally a despicable and bald villain, Superman was reworked and reused repeatedly as the partners tried in vain to make the character a new centerpiece in daily comic strips. Finally, in 1938, DC Comics ran the hero as a storyline in Action Comics #1, with the caveat that Shuster and Siegel would sell the rights to their creation for $130. Siegel and Shuster entered a 10 year contract and continued to produce more material for Superman, but became increasingly dissatisfied with their employment with the publisher. As Superman became a runaway success, the pair sued DC on multiple occasions in an attempt to reclaim a portion of the copyright and profits, beginning a fraught legal battle which would span decades.

During WWII, Shuster was passed over from the draft due to his failing eyesight, and lived in New York caring for his father. While Siegel continued pursuing a career in comics, Shuster distanced himself from the business, balancing odd jobs and the occasional illustration. By the 1970s, Shuster was barely able to support himself financially, and felt isolated in New York. Siegel convinced his friend to join him out west in San Diego, where the two enjoyed a second burst of publicity and a more favorable settlement from DC Comics. Later renting a small apartment just around the corner from Siegel, Shuster spent time with friends and family - even dating for a short period - but never married. Shuster, the illustrator who first sketched Superman’s iconic red and blue jumpsuit, remained in debt until passing away in 1992. Joe Shuster died in Los Angeles, California, and was cremated.

In his final interview, Shuster spoke of his immense pride in leaving behind a cultural symbol like Superman, and reflected happily about new generations growing up with the Man of Steel.