The SLOVENIAN NATIONAL HOME, in the 6400 block of St. Clair Ave., is the largest and most significant social and cultural center for local Slovenian Americans. Ideas for a national hall were discussed as early as 1903, when the Slovenian sokols sought to build a gymnasium and library. The opening of Knaus' Hall that year, followed by other privately owned halls, slowed the plans for a publicly held center. Interest renewed in 1914 when 105 delegates from 42 organizations met to undertake selling $10 shares. By 1916 $10,000 had been collected; a second conference established bylaws and a board presided over by FRANK J. KERN. In 1918 the board purchased the Italianate Victorian Diemer estate for $45,000 and member societies began meeting in the mansion. Efforts to build a St. Clair hall continued; in 1924 the Slovenian Natl. Home opened with a final cost of $106,240. 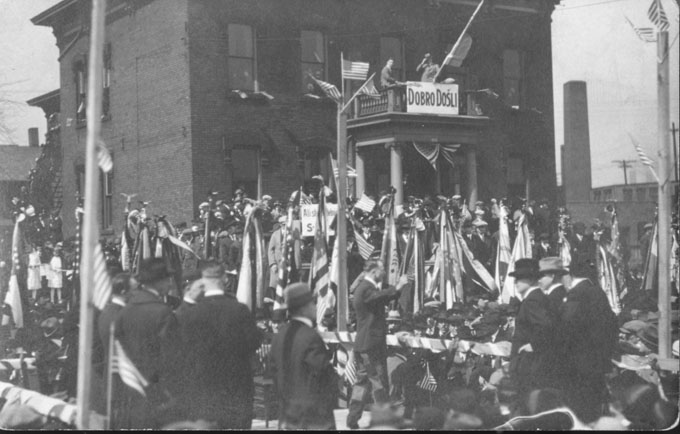 A large crowd and flags and banners fill this image of the cornerstone ceremony for the Slovenian National Home on St. Clair Avenue., ca 1924. WRHS.

The new building, constructed around the old Diemer Mansion, could handle large and small affairs simultaneously in 2 auditoriums and several meeting rooms. It also contains offices, the Slovenian Natl. Library, the sokol gymnasium, and has been the scene of numerous events, with nearly 100 fraternal, political, social, cultural, and sports societies, mostly Slovenian-American, having used the facility. Activities at the home revitalized in the 1960s with groups established by a new generation of young Slovenian immigrants. The children of older immigrants returned to the hall for meetings and special occasions such as debutante balls. Thanksgiving Day polka festivals attracted upward of 2,000 each year. The hall also hosted political rallies and visits by various local and state candidates.

In 1984 the Greater Cleveland Landmarks Commission named the Slovenian National Home a Cleveland landmark. In April 1994 the home dedicated the Eddie Kenik annex after long-time president and trustee, Eddie Kenik.