SOCCER. The sport of soccer originated in Great Britain and spread throughout the world during the second half of the 19th century. It is not surprising that immigrants of British origin first brought the game to Cleveland during that time. By 1906 distinct teams were formed, the most prominent being the Cleveland Soccer Football Club. In that year the organization was responsible for bringing the Corinthians, a world famous English amateur team made up largely of Oxford and Cambridge graduates, to Cleveland. The locals lost 8-0 before a crowd of nearly 1,000 at Case field. The spectators thoroughly enjoyed the game. Among them were Cleveland Schools Superintendent of Physical Instruction George Ehler, Physical Director Fischer of Lincoln High School and FRANK R. VAN HORN, president of the Case Athletic Assn. All agreed that soccer would be a good addition to the high school program. In fact, a 2-game series between ST. IGNATIUS and CENTRAL HIGH SCHOOLS was played in the fall of 1907. Each team won a game in the first ever soccer contest in Cleveland between secondary schools. 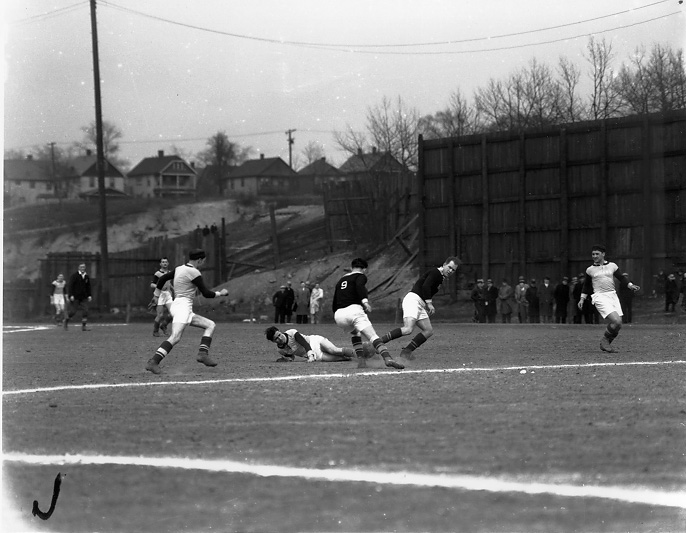 Players vie for control of the ball during a soccer match at Luna Park in 1938. WRHS.

The enthusiasm generated by the Corinthians' visit also contributed to the formation of the first amateur league. Play began in Oct. 1906 and the inaugural teams were the Thistles, Cleveland Club, Engineers, and Magyars. The Ohio State Soccer Football Commission was organized and affiliated with the U.S. Soccer Football Assn. in 1915. Growth was steady until the immigration restrictions following WORLD WAR I began to slow the tide of Europeans coming to the U.S. During the 1920s and 1930s anywhere from 75 to 125 teams were registered in Northern Ohio. The names of the teams show them to be backed by business, fraternal, religious and ethnic organizations. Some well known Cleveland firms that sponsored teams were White Motor Co. (see WHITE MOTOR CORP.), Favorite Knitting Mills, TELLING-BELLE VERNON CO., Graphite Bronze, Ideal Rubber Co., Bruell Insurance, Rosenblum Clothes, Gold Bond, and Bartunik Clothes.

Other team names, such as Britannia, Shamrocks, Thistles, All Welsh, Swedish Americans, American Hungarians, Holland Americans, Banat German Sports, American Swiss, La Fraternidad de los Iberos en America, Danish Athletic Club, and Slavia, identified a variety of ethnic groups promoting the sport. A few teams, such as Chagrin Falls, Willoughby, Rocky River, Lorain and Cleveland carried the name of cities and towns from where players were drawn. Many teams in the 1920s and early 1930s had their own fields, such as American Hungarian Park (E. 80th and Kinsman), Sparta Field (E. 52nd and Harvard), Magyar Field (W. 73rd and Denison), Slavia Hooper Field (E. 55th St.), Shamrock Field (W. 65th and Herman), Welsh Field (E. 183rd and Coit), Banat Winton Field (W. 117th and Madison), and F.I.A. Field (E. 42nd and Harvard). Other sites were provided by the City of Cleveland and included two fields at GORDON PARK, two at EDGEWATER PARK, two at Woodhill Park, two at Woodland Hills Park (see LUKE EASTER PARK), and one each at GARFIELD PARK, and under the Clark Ave. Bridge. The Lakewood Elks made their field available and many important games were played at LUNA PARK Stadium (E. 105th and Woodland) and BALDWIN RESERVOIR.

The growth experienced during the 1920s reached its climax during the 3-year period 1930-May 1932. During that time Bruell Insurance finished runnerup in the National Challenge Cup tournament and Goodyear and Shamrocks became National Amateur Cup champions. Bruell lost a 2-game series to the Marksmen of Fall River, MA, in 1930. In the following year, the Goodyear Wingfoots won the National Amateur title by defeating Black Cats of New Bedford, MA. Although Goodyear was an Akron team, they played in the Ohio Intl. Soccer League, which was centered in Cleveland. On 1 May 1932 the Shamrocks became the first and only Cleveland team to win a national soccer title by defeating Santo Christo of New Bedford, MA, at Slavia Field. A quieter phase ensued for Cleveland soccer following the Shamrock triumph, although in 1945 the Cleveland Americans were able to reach the National Challenge Cup Finals. The Cleveland team lost a 2-game series to Brookhatten of New York. In 1971, Inter-Italians of Cleveland lost in the finals of the National Amateur Cup to Kutis of St. Louis in a game played at Brooklyn High School. In 1973, Inter-Italians of Cleveland lost the National Challenge Cup final to Maccabee of Los Angeles in a 5-3 match that went into overtime. The success of the Inter-Italians symbolized the revival of soccer following the period of decline which began in the mid-1930s.

Soccer was finally becoming part of Cleveland's sports culture. In the late 1960s school soccer began to flourish for the first time since its abandonment by the Cleveland schools in 1931. During the interim, only UNIV. SCHOOL, which established an interscholastic program in 1927, kept the game alive at the secondary education level. The Preppers played in an interstate league with Shady Side Academy of Pittsburgh, PA, Cranbrook School of Bloomfield Hills, MI, Western Reserve Academy of Hudson, OH, and Nichols School of Buffalo, NY. During the time that soccer was largely absent from the schools some senior soccer clubs tried to keep the sport alive by establishing junior teams. Many of the junior players in the 1930s also played at the Cleveland junior high schools.

By 1994 the revival of soccer that had begun with the increased immigration of the 1960s, and the favorable publicity associated with England's courageous 4-2 overtime victory over Germany in the 1966 World Cup Finals, translated into 150 boys and girls teams in the Cleveland area, although ironically no CLEVELAND PUBLIC SCHOOLS were playing the sport. In addition, over 25,000 youth were registered to play through the Ohio Youth Soccer Assn. with jurisdiction in northern Ohio. Univ. soccer received a boost when Cleveland State (see CLEVELAND STATE UNIV.) was established in 1965 and continued the program launched by FENN COLLEGE in 1954. Many of the early players were born in Europe and come to Cleveland in the post-WORLD WAR II era.

Professional soccer was first introduced to Cleveland in the autumn of 1929 when the Midwest Professional Soccer League was launched under the leadership of Joseph Triner, a Chicago businessman. Two Cleveland teams, Bruell Insurance and Slavia, were joined by two clubs from Detroit (Detroit Soccer Club and Holly Carburetor), and two from Chicago (Sparta Athletic Club and the Carpenters). The league survived for a season playing a double round-robin format, with a double elimination competition for the Triner Cup in the spring and summer. Bruell Insurance was Triner Cup Champion. After the demise of the Midwest Professional Soccer League, professional soccer did not reappear for 37 years. In 1967 prominent Cleveland businessman VERNON STOUFFER obtained a franchise for Cleveland in the United Soccer Assn. The Stoke City Stokers from England's First Division represented Cleveland and played a schedule that began in mid-June and ended in September. In 1968 the Cleveland Stokers became a charter member of the North American Soccer League and were assigned to the Lakes Division of the Eastern Conference. Other teams in the division were the Detroit Cougars, Chicago Mustangs, and Toronto Falcons. The games were played in major league baseball stadiums with a playoff series in September to determine a champion. Prominent Clevelanders involved in the team, besides Stouffer, were HOWARD METZENBAUM, chairman of the board and treasurer, and Alva (Ted) Bonda, executive vice-president. The roster included players born in England, Argentina, Spain, Portugal, Holland, Germany, Hungary, Yugoslavia, and Nigeria. The manager was Norman Low, former player personnel director for Liverpool Football Club.

The franchise failed after 2 years but professional soccer returned on a more modest scale in 1972. The team was called the Cleveland Stars and it was organized largely by men of Italian origin who were involved with the successful Inter-Italian amateur team. The Stars used BALDWIN-WALLACE's George Finnie Stadium and averaged almost 3,000 fans a game in their first year. Local players were used and the coach was Olinto Busetto. After 3 years the small investors who had backed the club were no longer willing to participate. With professional soccer in jeopardy, Howard Collier, a successful businessman, led a group of 4 investors who rescued the franchise and renamed the team the Cobras. In their first year the team was division champion under coach Herb Haller. They were never so successful again, although Dr. John Gyekenyesi, a NASA engineer, through skillful management kept the team in operation from 1975 through 1982. The sale of the franchise to Atlanta brought an end to outdoor professional soccer in Cleveland.

Currently, the only professional soccer played in Cleveland is of the indoor variety. Indoor soccer was introduced to Cleveland in 1928 when a successful 1-day tournament won by the American Hungarians was held at PUBLIC AUDITORIUM. Over the years competitions have been held at the CENTRAL ARMORY, the EQUESTRIUM, Collinwood High School, Turners Hall, the Force Fitness Centers, Cleveland State, and CUYAHOGA COMMUNITY COLLEGE. The origins of professional indoor soccer date to 2 Feb. 1930 when the Slavia and Bruell Insurance American Hungarians played a 3-game series to determine the professional championship of Cleveland, the winner to be determined by total goals. The games were played indoors on turf at the Equestrium with 7 players on a side; the Bruells won with a 6 goal advantage. Indoor soccer reappeared in 1978 when the Cleveland Force (see CLEVELAND FORCE SOCCER TEAM) was established to play in the Major Indoor Soccer League. Under the astute direction of Bart Wolstein, the club enjoyed great success. They played at the Richfield Coliseum, often in front of nearly 20,000 fans. When the franchise and the league were terminated after the 1990 season, George Hoffman, an Akron stockbroker, saved professional indoor soccer in Cleveland by organizing the CLEVELAND CRUNCH. The team plays at the Cleveland State Convention Center and is a member of the National Professional Soccer League. The Crunch won the championship in 1994, making them Cleveland's first professional championship team in 30 years.