The SPIRIT OF '76, depicting a flag bearer, drummer boy, and fifer marching across a battlefield during the American Revolution, is perhaps the most famous painting produced in Cleveland. The 8' x 10' oil painting was created by ARCHIBALD WILLARD at the suggestion of Cleveland photographer JAS. F. RYDER, who felt that a semihumorous, patriotic painting would be appropriate for showing at the 1876 U.S. centennial exhibition in Philadelphia.

Originally entitled Yankee Doodle, the painting was begun by Willard at his home in Wellington, OH, and moved in Feb. 1876 to Willis Ame's studio in the old Union Natl. Bank Bldg. at 308 Euclid Ave. to facilitate modeling sessions. Hugh Moser, a CIVIL WAR veteran and friend of Willard's, posed as the fifer; HENRY K. DEVEREUX, son of Gen. JOHN H. DEVEREUX, served as the model for the drummer; and Willard's father, Rev. Samuel Willard, served as the inspiration for the flag bearer. The death of Willard's father before the completion of the painting led Willard to create a serious rather than humorous work. After the exhibition, the painting was shown in several large cities, acquiring its present name of Spirit of '76 in Boston before being returned to Ryder's gallery, where it was purchased by Gen. Devereux.

The painting's popularity led Willard to paint a minimum of 14 "original" versions. Two copies are held in Cleveland, one at the WESTERN RESERVE HISTORICAL SOCIETY and the second at CLEVELAND CITY HALL, this copy having been commissioned by Mayor NEWTON D. BAKER in 1912. The authentic original, substantially altered by Willard in an 1893 "retouching," is currently in Marblehead, MA. 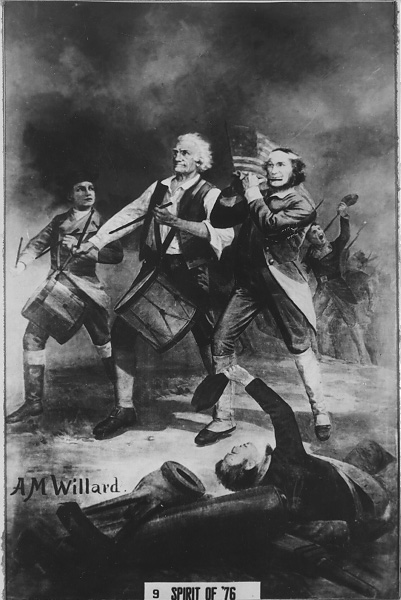