SPRINGVALE GOLF COURSE AND BALLROOM are public facilities located on Canterbury Rd. south of Butternut Ridge Rd., in the city of NORTH OLMSTED, which owns and operates them.  The ballroom, which is one of the oldest still operating in Ohio, was built by Fred Biddulph on a 100 plus acre farm settled in 1865 by his grandparents John and Christina Biddulph, immigrants from England.  Originally called "Spring Vale Dance Hall," it opened to the public on May 19, 1923, but closed just four years later, in 1927, when illness and financial need forced Fred Biddulph to sell his grandfather's farm to a real estate developer.   L. H. Heister, Jr., Inc., the developer who purchased the farm, proposed to build an eighteen hole GOLF course and residential subdivision upon it and adjacent land. The golf course, called Homelinks, opened the following year with Biddulph's dance hall serving as its clubhouse.  However, with the onset of the Great Depression in 1929, the rest of the proposed residential development foundered and the developer went bankrupt.

In 1936, the Biddulph family, which had sued L. H. Heister, Jr., Inc., in Cuyahoga County Common Pleas Court to  recover its farm, obtained a judgment against the developer and regained possession of both the farm and the vacant dance hall building, which had been abandoned as a clubhouse several years earlier when Homelinks Golf Course (renamed Links Golf Course in 1989)  opened its new clubhouse on John Road in Olmsted Township. On April 29, 1936, the Biddulph family reopened the dance hall and renamed it "Spring Vale Ballroom." Several years later, "Spring Vale Ballroom" became "Springvale Ballroom." During the height of the popularity of ballroom dancing in the decades of the 1930s and 1940s, it was a popular destination for Clevelanders.  In subsequent decades, the ballroom has catered to smaller groups interested in learning the art of ballroom dancing and has also served as a site for wedding receptions and other events. 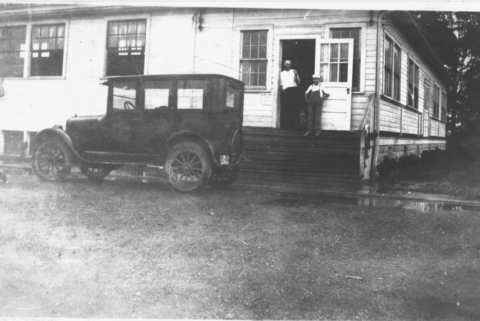 When the Biddulph family recovered its farm and dance hall in 1936, it also gained possession of a five-hole golf course.  Five holes of the Homelinks golf course which had opened in 1928 had been built on Fred Biddulph's farmland. In 1939, George Biddulph, Fred's son, took  four of the existing holes on his father's land and added five more to create a nine-hole course called Spring Vale Golf Course. It remained a nine-hole course until 1952, when George expanded it again, constructing a new clubhouse and adding nine additional holes.  Known as Springvale Country Club, the course operated thereafter as a semi-private course for club members and, on a pay-as-you-play basis, for members of the public.. Fred Biddulph died in 1957, and in the years that followed George Biddulph continued to manage the golf course and his sister, Rose Biddulph Scheef, and then his daughter Bonnie DeLorenzo, managed the ballroom.