ST. AGNES PARISH was established in 1893 to serve upper middle-class Catholics residing in the HOUGH neighborhood, but became a majority AFRICAN-AMERICAN parish by the 1950s.

As early as 1888, a group of prominent Catholic women petitioned Bishop RICHARD GILMOUR to establish a parish in the Hough neighborhood of Cleveland to attend to the spiritual needs of the growing IRISH and GERMAN communities there. Although the death of Bishop Gilmour in April 1891 temporarily hampered their efforts, the women successfully pled their case to Bishop IGNATIUS F. HORSTMANN in early 1893. After acquiring a property on Euclid Avenue and Hilburn Avenue (East 81st Street) in February 1893, Bishop Horstmann officially established St. Agnes Parish on April 29. Father Gilbert P. Jennings, who was appointed as the parish's first pastor, held the first Mass on September 3, 1893. The parish recruited the Sisters of St. Joseph to direct a small, tuition-free parochial school that opened in 1894. The growth of the parish community necessitated the expansion of the church building in late 1894 and the construction of a new school building in 1904. St. Agnes High School, a secondary school for girls, opened in 1911.

The parish community broke ground for a new church building on March 19, 1914, exemplifying the growth of St. Agnes in size as well as wealth during the early decades of the twentieth century. Bishop JOHN P. FARRELLY dedicated the new parish church, a Romanesque stone and marble structure, on June 18, 1916. Designed by architect John T. Comes, the oblong church was built of Bedford stone with a facade featuring three round carved arches with deeply recessed doors in the entryway and a large rose window above. Bishop JOSEPH SCHREMBS consecrated the church building on May 2, 1923, once the debt for its construction was repaid. The parish erected a new convent for the Sisters of St. Joseph in charge of elementary and high schools in 1924 as well as a new rectory in 1927.

To help the Hough community during the difficult years of the Great Depression, St. Agnes sponsored the People's University, an educational program offering classes in philosophy, business, English, French, and clerical skills from 1933 until 1936. The Depression did claim St. Agnes High School, which closed in 1932. 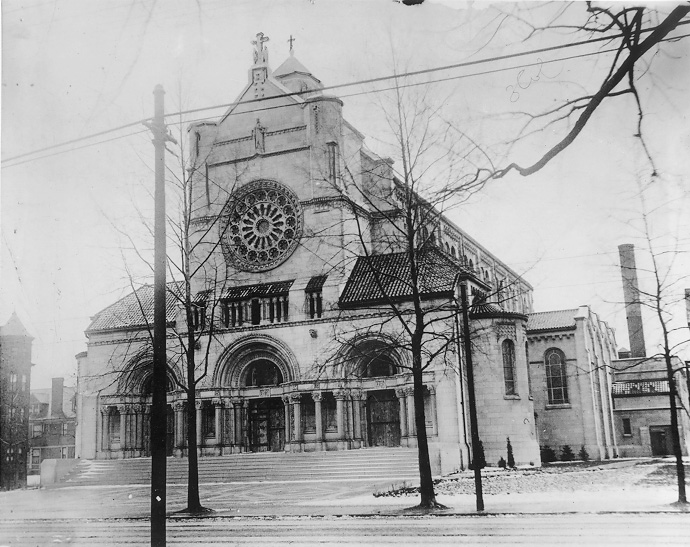 This exterior view shows St. Agnes Catholic Church at Euclid and E. 81st. during the 1940s. All but the bell tower was demolished in 1975. Cleveland Press Collection, CSU Archive.

During his long and prolific tenure at St. Agnes, Father Jennings combined his spiritual and social duties as a pastor with active involvement in the cultural life of Cleveland. One of his main contributions to the city includes the creation of the Braille book collection at the CLEVELAND PUBLIC LIBRARY. Pope Pius XI elevated Father Jennings to the rank of domestic prelate in recognition of his religious and public service in Cleveland. Monsignor Jennings passed away on April 17, 1941.

Monsignor Richard Gibbons, who succeeded Monsignor Jennings at St. Agnes, faced the challenge of maintaining the parish's large campus at a time of racial residential turnover in the Hough neighborhood. As the original parishioners moved further east, African Americans moved into the neighborhood, most of them non-Catholics. Following the death of Monsignor Gibbons in January 1949, Bishop EDWARD F. HOBAN appointed Auxiliary Bishop FLOYD L. BEGIN to reach out to and serve the new residents of St. Agnes Parish. During his tenure, Auxiliary Bishop Begin reopened the parish kindergarten and welcomed African Americans into the Roman Catholic Church.

When Pope John XXIII appointed Auxiliary Bishop Begin the first bishop of Oakland, California, in early 1962, the Diocese of Cleveland placed the parish in the care of the Missionary Servants of the Most Holy Trinity, an order dedicated to serving African-American and LATINO Catholics. The week-long HOUGH RIOTS, which ravaged the Hough neighborhood in July of 1966, exacted a heavy price, both physically and psychologically, on the St. Agnes community. Crises continued to plague the parish in the 1970s: the parish school closed in 1973 and costly repairs to the church building were required a year later. Faced with renovation and a dwindling congregation, the Diocese opted to demolish the church building in a controversial decision. St. Agnes Church was razed on November 24, 1975.

Even without a church, St. Agnes Parish honored its historic commitment to serving the people of Hough neighborhood by sponsoring a crisis ministry for the poor and providing chaplain services to the CLEVELAND CLINIC and nursing homes. On March 30, 1980, the Diocese officially merged St. Agnes with the neighboring OUR LADY OF FATIMA PARISH to create ST. AGNES-OUR LADY OF FATIMA PARISH.