ST. MARY'S ON-THE-FLATS, the colloquial name of the parish of Our Lady of the Lakes, was the first Catholic church in Cleveland, organized in 1826 by IRISH Catholic immigrants. Before it closed in 1886, it spawned many west-side parishes and ST. JOHN CATHEDRAL. Masses were first said in Cleveland by visiting priests, including the Very Rev. Stephen Badin, the first priest ordained in America. St. Mary's first resident pastor was Clevelander John Dillon, appointed in 1835; the parish met in the Masonic Hall, Shakespeare Hall, and Mechanics Hall. Before Fr. Dillon died in 1836 at age 29, he had raised $1,000 toward a church building. In 1837 property at the corner of Columbus and Girard streets in the Flats was sold on land contract to establish the parish of Our Lady of the Lakes. (This name was eventually replaced by the more common St. Mary's on-the-Flats.) The first Mass was said in the frame building in 1839, dedication followed in June 1840, and the building, a mixture of Greek Revival details, was completed later that year. In 1847 the Diocese of Cleveland was established, and Most Rev. AMADEUS RAPPE became the first bishop. St. Mary's on-the-Flats served as his cathedral until St. John Cathedral was completed in 1852. 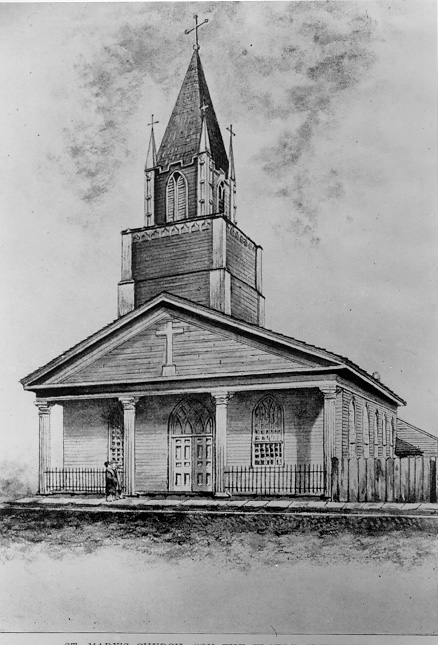 A detailed drawing of St. Mary's on the Flats, the first Catholic church in the city, 1838. WRHS.