The STERLING-LINDNER CO. was a combination of 3 smaller stores—the Sterling & Welch Co., the W. B. Davis Co., and the Lindner Co.—each of which was a leader retailer in its own specialty. Sterling & Welch began in 1845 when Thos. S. and Wm. Beckwith opened a dry goods store on Superior St. In 1857 the store replaced its dry goods line with floor coverings and curtains. Both Frederick A. Sterling and Geo. P. Welch joined the company in its early years and by 1889 they had control of the partnership which was incorporated in 1902 as the Sterling & Welch Co. In 1909 the firm moved from its location on lower EUCLID AVE. to 1215 Euclid Ave., where it built one of the largest and finest home furnishing stores in the area. In 1927 Sterling & Welch began the tradition of installing the nation's largest indoor Christmas tree in its atrium. 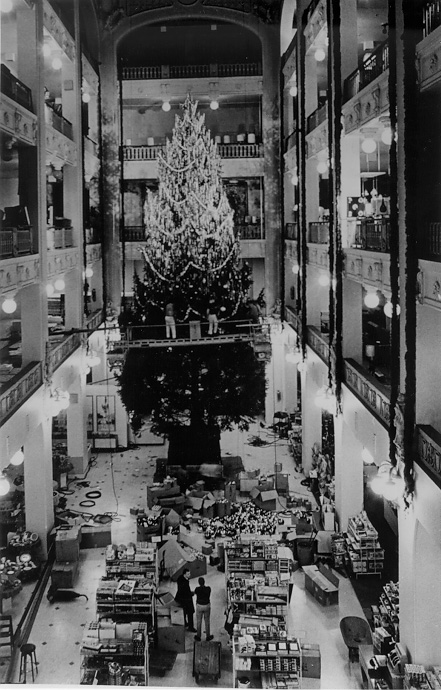 This large, lavishly decorated indoor Christmas tree at the Sterling-Lindner company, as seen in this ca. 1967 photograph, was a regional holiday highlight. ca. 1967. CPL.

The W.B. Davis Co., a pioneer menswear store in Cleveland, began in Jan. 1879 as a custom-shirt factory operated by Wm. B. Davis and Edwin Parsons at Superior and Bank (W. 6th) streets. By 1880 Davis had changed the business to a retail men's furnishing store, which was incorporated in May 1888. In 1917 Davis moved from an earlier location on Euclid Ave. to its newly acquired Davis Bldg. at 325 Euclid.

The Lindner Co., once the largest women's specialty store in Cleveland, was begun by Max Lindner, Max Hellman, and MORRIS BLACK in Apr. 1908 on E. 9th St., and by 1915 Lindner had built and occupied a larger store at 1331 Euclid Ave.

In 1947 one of the nation's largest operators of department stores, the Allied Stores Corp. of New York, acquired Lindner & Davis. Two years later, it purchased Sterling & Welch. In Aug. 1949 the Lindner-Davis general department store opened in the remodeled Higbee Bldg. at Euclid Ave. and E. 13th St., adjacent to the Sterling & Welch store. The following year, the 2 companies were merged into the Sterling-Lindner-Davis Co. Davis was dropped from the name in 1958. In the early 1960s, the firm felt that it was in a prime location downtown and decided not to establish suburban branch stores. Allied Stores then realized that without outlying stores, Sterling-Lindner was not profitable. On 21 Sept. 1968, the store was closed.