SPEAK IN TONGUES was an underground music venue located on Lorain Road and West 44th Street that operated between 1994 and 2001.

Speak in Tongues was founded by Dave Petrovich and Shelby Bell in a store front leased from the Ohio Communist Party for $800 a month. Petrovich and Bell wanted to open a musical performance space with a do-it-yourself ethos that would host musical artists that were far outside of the mainstream. True to the intention of its founders, the space functioned as an anarchistic community space that on any given night might host anything from avant garde jazz to chaotic thrash shows punctuated by fireworks. Unlike a traditional music venue, there was no bar and no door fee. Instead, the venue was sustained on a donation only basis.

From the inception of Speak in Tongues until his death in 1997, Bell built a network of relationships with national booking agents who would ordinarily book artists at traditional music venues. During this time, Speak in Tongues cultivated a reputation for attracting diverse artists including Neutral Milk Hotel, Low, Jimmy Eat World, Smog, and the Promise Ring. The most prominent band that Speak in Tongues hosted was Modest Mouse in 1997. The Portland-based, future Grammy nominated indie rock band played Speak in Tongues from some of their first national tours. The relationship persisted long after they had outgrown such a small venue. In November of 1998, while they were playing 1,000 seat venues, their Cleveland tour stop was at Speak in Tongues.

Throughout the early period of the venue, the basement was subdivided into illegal living spaces in order to split the cost of rent. Living conditions in the basement were squalid. That coupled with the chaotic nature of living in a music venue contributed to high turnover of residents. During this time several residents worked at a coffee shop in the Warehouse District called The Drip Stick which was owned by a Mafia informant named Anthony Delmonti. The Drip Stick was under FBI surveillance and its phones were tapped. Around this time, there was a noticeable increase in police presence at Speak in Tongues which some residents attributed to their connection with the Drip Stick.

By 2001, all of the residents moved out of Speak in Tongues and the business model changed. Instead of relying on residential rents to supplement donations, the basement was converted into practice spaces and Speak in Tongues became a collective. Under this model, 25 members paid $25 a month and in exchange they could book any kind of event that they wanted once a month. The collective model lasted less than a year. That year, the communists sold the building to Gene Burnworth. In late-December of 2001, Burnworth gave Speak in Tongues one week to leave the space. Nine Shocks Terror, the Unknown, and Brian Straw played the final show on December 31st, 2001. 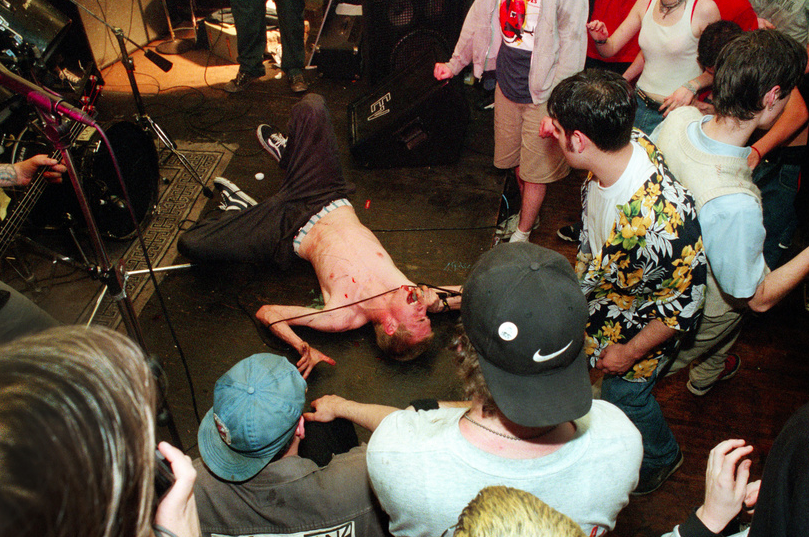