The TOWER CITY CENTER is a mixed-use development consisting of adaptive reuse and new construction. It is one of the cornerstones of downtown Cleveland's rebirth in the 1990s. The complex includes what was once known as the CLEVELAND UNION TERMINAL and the associated buildings at PUBLIC SQUARE. 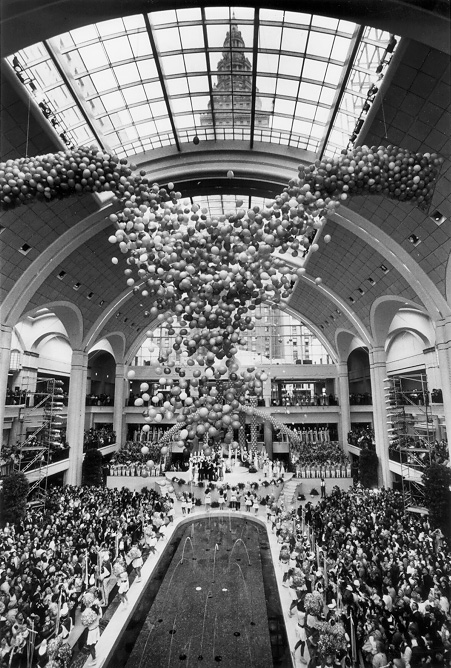 A large crowd watches an indoor balloon release at the grand opening of 'The Avenue' at Tower City Center, March 1990. Courtesy of the Plain Dealer.

In 1986 Forest City Enterprises, Inc., owner of the station, the Terminal Tower, the former Post Office, and the former train yards (now a parking lot), announced ambitious redevelopment plans for their portion of the complex. Architect for the project was RTKL Ohio Corp. of Dallas. The official groundbreaking took place on 28 Sept. 1988. Within the next 3 years a large portion of the historic but under-utilized station was converted into a complex which included stores, an 11-screen cinema, and a new food court. Historic elements such as brass storefronts, the English Oak Room, and the portico were restored. The old Post Office (now MK-Ferguson Plaza) was renovated into office space (Van Dijk/Johnson & Partners). The rapid transit lines were centralized and a new station was built. From the exterior, the most notable changes were a new skylight and 2 new 11-story buildings, one of which housed a Ritz-Carlton Hotel.

The grand opening of The Avenue, the retail portion of the complex, took place on 29 March 1990. By early 1991 the remaining construction was completed. Further expansion of the complex in 1994-95 linked Tower City and the Avenue to Gund Arena and Jacobs Field at Gateway (see GATEWAY ECONOMIC DEVELOPMENT CORP.).