VAN DIJK, PETER (13 Feb. 1929 - 7 Sept. 2019) noted Cleveland architect was responsible for the design and/or construction management of many area landmarks including the Anthony J. Celebrezze Federal Building in Cleveland and the pavilion at Blossom Music Center in Cuyahoga Falls. 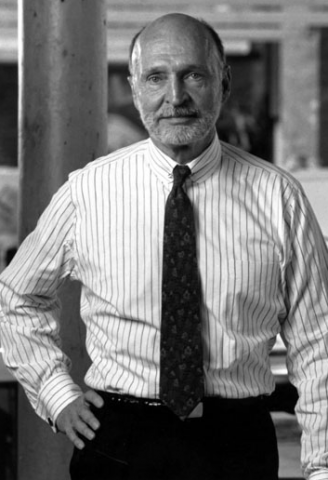 He was born in Surabaya, Indonesia where his father worked as an engineer for Royal Dutch Shell.  The company was able to shelter his family from chaos of their native Netherlands during the Second World War by posting them on oil development projects around the world. Van Dijk credited his affinity for building to his childhood in Venezuela where he and his brother had to build their own toys. The family moved to the United States when van Dijk was a teenager and he went on to attend the University of Oregon.

Following his graduation in 1953, he spent two years in the US Army and then enrolled in the Masters program in Architecture at the Massachusetts Institute of Technology in 1955. While at M.I.T. he studied under renowned architects Louis Kahn and Pietro Belluschi. Van Dijk came to Cleveland in the early 60’s to oversee construction of the new Anthony J. Celebrezze Federal Building. Three firms won the bid for the job and he was charged with the task of coordinating their efforts. His project management skills were so impressive that upon completion of the project, each firm offered him a job. Van Dijk chose the firm, Schafer, Flynn, and Associates where he would eventually become a partner and work for the rest of his career.  The firm would eventually become van Dijk, Westlake, Reed, Leskosky.

Peter Van Dijk left an indelible architectural imprint on the Cleveland area. His modernist buildings included the Upper School at UNIVERSITY SCHOOL, CAIN PARK AMPITHEATER, the Westlake Performing Arts Center, and the B.F. Goodrich corporate headquarters among others. His best known building is the Blossom Music Center pavilion. The amphitheatre, which serves as the summer home of the CLEVELAND ORCHESTRA, sits in a natural bowl in the CUYAHOGA VALLEY NATIONAL PARK. The triangular wooden roof of the pavilion rises dramatically above the forest around it.

His later career took an unexpected turn; van Dijk shifted from creating new, modernist buildings, to preserving historic ones. Van Dijk felt obligated to find new uses for old spaces for future generations to enjoy. Among the notable structures that he worked to restore were the Ohio and STATE THEATERS at PLAYHOUSE SQUARE, the HUNTINGTON BANK BUILDING, and MK Ferguson Plaza (formerly the Cleveland Post Office).

Peter van Dijk died at his CLEVELAND HEIGHTS home on September 7, 2019. He was survived by his wife, Roberta van Dijk, their sons Raymond, Leo, Hage, and James, and their daughter, Jennifer.