WATER SYSTEM. The production, purification, and distribution of potable water constitutes a "hidden system" in the infrastructure of the modern city. Until faucets run dry, or reservoirs are exhausted, citizens tend to remain unaware of the nature and condition of the complex technological, social, and political attributes of the water system.

Early settlers in Cleveland were dependent on surface-water supplies from ponds, lakes, rivers, and streams, and upon dug wells, the latter becoming more prevalent as population density increased in the early walking city. A town pump on PUBLIC SQUARE is reported to have been in operation in 1812. Ca. 1820 a well existed at Bank (W. 6th) and Superior designated mainly for firefighting. At the same time, "every family had a well; however, Benhu Johnson hauled lake water when droughts set in . . . [for] twenty-five cents for two barrels." In Jan. 1833 the privately owned Cleveland Water Co. was chartered to supply water for the village, but the city council continued its involvement, allocating $35 in 1840 to sink public wells at Public Square. By 1852 water was being drawn from springs, wells, canals, and the CUYAHOGA RIVER, with storage cistern-based pumps utilized in the business district for firefighting and public use. A dependable public water system to provide fresh water, together with a sewage system to dispose of the used water, was needed. Both were capital-intensive municipal functions that reflected a growing concern for local public health and the needs of Cleveland's growing businesses. The city was prosperous enough to acquire the needed financing for a municipal waterworks, and a popular vote (1,230 to 599) in 1853 authorized the city to issue $400,000 in bonds to build it. Water was first brought from Lake Erie in Sept. 1856, via a 50" boilerplate pipe tunnel extending 300' into the lake, reaching shore at about W. 58th St. At the same time, the KENTUCKY ST. RESERVOIR at Kentucky (W. 38th) and Prospect (later Franklin) streets was opened to store water pumped by 2 Cornish steam engines, the first west of the Alleghenies. Two distribution mains totaling 44 mi. were established, along with a water fountain on Public Square. By 1864 most of the 75 cisterns placed around the city for firefighting had been supplanted by piped water. Cleveland now had the ability to provide fire protection for the city and make a constant volume of fresh water readily available for residential and business needs. In 1856, the waterworks' first year of full operation, 127 million gallons of water (38,000 gallons per day) were distributed (in 1900, distribution was about 20 billion gallons—about 5.5 million gallons per day; in 1970, about 129 billion gallons—about 35.3 million gallons per day).

With the advent of piped water, traditional privies, storage cisterns, and other means for disposing of sewage rapidly became inadequate. The first sewer in Cleveland is reported to have been built for surface drainage of Euclid St. in 1856. Two years later a rudimentary sewage system consisting of open drains conveying the wastewater downhill toward the Cuyahoga River and Lake Erie was begun. To gain access to fresh water beyond Lake Erie's polluted shoreline, a new water-intake crib and tunnel were built some 6,600' offshore in 1874. However, in 1881 city health officials protested that some 25 sewers, factories, oil refineries, and other industries were polluting the Cuyahoga River and Lake Erie, source of the city's drinking water. By that time, 125 mi. of water mains had been completed in Cleveland, and the system's capacity was about 10 million gallons per day, serving about a third of Cleveland citizens. In the 1880s the original Kentucky St. Reservoir had already become inadequate, requiring the building of the Fairmount and Kinsman reservoirs to service the growing population moving toward the heights east of downtown Cleveland. 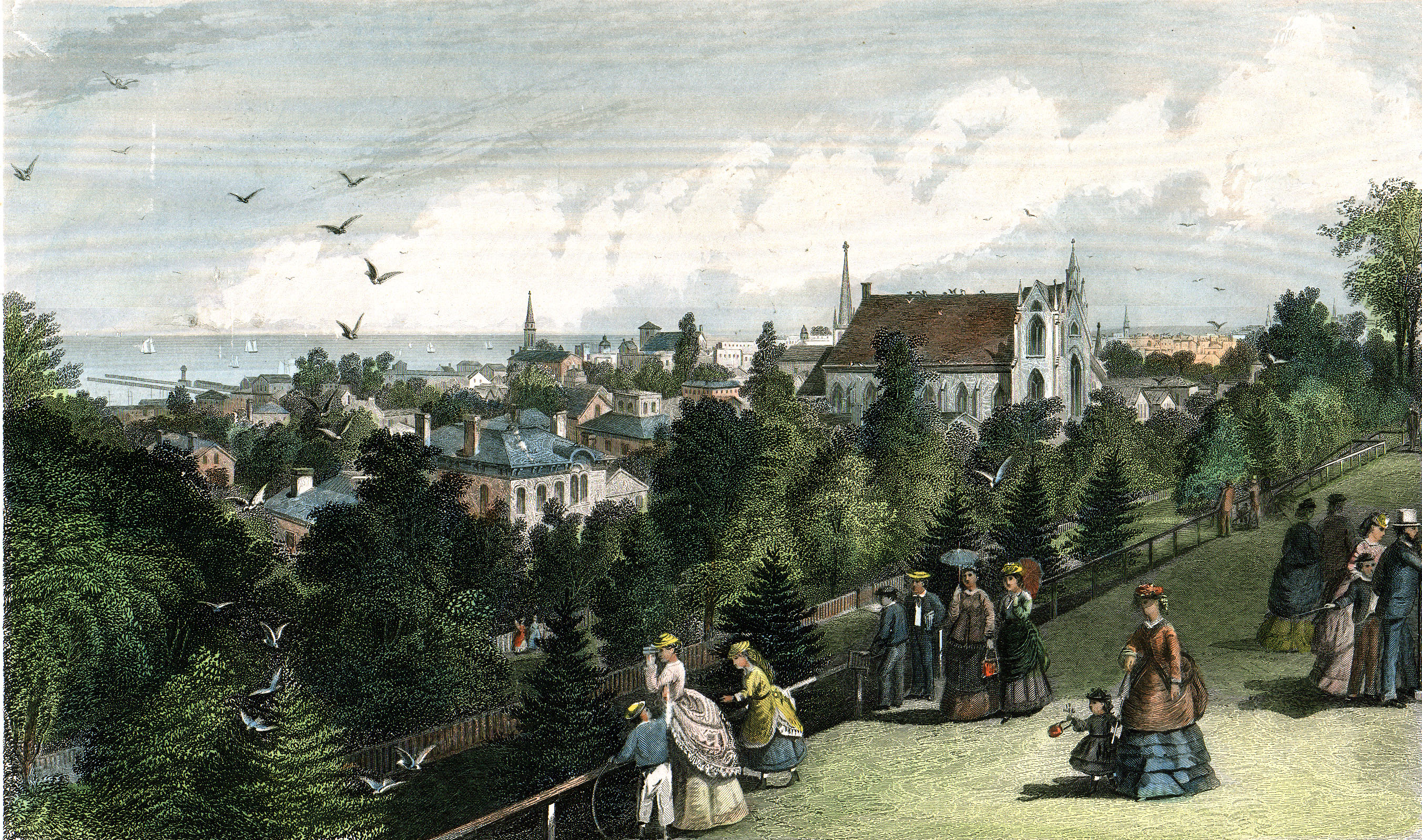 Women and children and family walk along the promenade on top of the Kentucky Street Reservoir, ca. 1872. WRHS.

To mitigate the growing pollution, the water system extended intakes farther and farther out into Lake Erie, and early in the 20th century finally provided treatment of the raw water. In 1890 a new 7' diameter, 9,117' long water inlet tunnel was completed. Yet another 9' diameter intake tunnel was begun in 1896, extending 26,000' into the lake, one of the longest in the world at that time; it was completed in 1904 after a considerable loss of life during its construction (see WATERWORKS TUNNEL DISASTERS). The intake structure for this tunnel, which at a distance resembled a freighter, was known as the "5 Mile Crib," the distance from the actual lake intake to the Kirtland pumping station, built in 1904 at Kirtland St. (E. 49th St.). Seven years later, in 1911, Cleveland introduced water chlorination to reduce the instance of water-borne bacteria, on the recommendation of Drs. Howard Haskins and ROGER G. PERKINS. Still unfiltered, the water was found unpalatable; in 1915 it was reported that on at least one occasion, thousands of people patronized springs in places such as WADE PARK and ROCKEFELLER PARK, requiring police to keep order. About 1916, the original 6,600' intake tunnel west of the "5 Mile Crib" was extended about 26,000' from shore to feed water to the Division Ave. filtration plant, which became operative in 1918. By 1920 the system of water mains had grown to 985 total miles, and it continued to grow in response to Cleveland's expanded water needs. The Baldwin Filtration Plant on the border of CLEVELAND HTS. was completed in 1925, with a reservoir capacity of more than 135 million gallons, capable of pumping up to 200 million gallons per day (see BALDWIN RESERVOIR). In addition, expansion and alterations begun much earlier on the Kirtland station were completed in 1927, giving Cleveland wholly filtered and chlorinated water.

As a municipal industry, the waterworks was expected to be self-supporting, and improved water quality was expensive; the water system's debt grew from $1,775,000 in 1886, to $4,266,000 in 1906, and reached $27 million in 1930. Beginning in 1856, charges were levied on water users in the form of a semi-annual flat fee paid by the owner of each dwelling or building, to pay off the bonds issued for construction and expansions. Widespread criticism of poor water quality and inadequate service, however, slowed customer growth until after the turn of the century, when both the quality and delivery of water improved. With the universal introduction of water meters into dwellings by 1908, the amount of water used could be gauged more accurately, producing more equitable customer charges. As a result of the growing customer base, the water debt accumulated from past improvements was easily amortized.

By the 1940s Cleveland's water system included cribs, 4 lake tunnels, 2 filtration plants (Division Ave. and Baldwin), 3 major pumping stations (Kirtland, Fairmount, and Division), and 2,700 mi. of water mains. During the post-World War II period, a new 3.5-mi., 10' diameter tunnel was built into the lake to supply water to the new Nottingham Filtration Plant and pumping station in northeast Cleveland. Completed in 1951, the plant had a capacity of about 150 million gallons per day. A fourth, 2.5-mi, 8' diameter tunnel, completed in 1958, extended northward into Lake Erie from the Crown Filtration Plant in WESTLAKE. The plant had a daily capacity of 50 million gallons, making the nominal capacity of the water system about 225 billion gallons annually. In 1970 the system had over 4,000 mi. of water mains, serving 75 sq. mi. in Cleveland and an additional 450 sq. mi. in Cuyahoga, Medina, Lorain, and Lake counties. Since 1856, when Cleveland's public water supply was established, annual consumption has increased an average of 12 billion gallons each decade—much of the increase coming in the 20th century. However, between 1970 and 1986 daily water consumption declined from about 545 million gallons to approx. 320 million gallons (about 118 billion gallons annually). Much of the decline may be accounted for by demographic changes and the loss of business and industry from greater Cleveland. The city's water system, however, had expanded its service area, providing water for Cleveland and 68 surrounding suburbs and municipalities in Cuyahoga, Lake, Summit, and Medina counties in 1986. The system had grown to about 5,800 mi. of water mains, serving some 400,000 accounts.

During the postwar period, purification and filtration continued to be improved. Beginning in 1965, sodium silicofluoride was added to the water to control tooth decay. In 1986, purification processes of settling and filtration were augmented by the use of aluminum sulfate for impurities coagulation, potassium permanganate for oxidation, chlorine for disinfection, and activated carbon for taste and odor control. Although most communities in Cuyahoga, Medina, and Summit counties served by Cleveland's water system had direct service, Cleveland Heights., BEDFORD, EAST CLEVELAND, and LAKEWOOD purchased their water in bulk for many years and redistributed it to customers, charging their own water rates. In 1986 this bulk service was extended to Lake County.

Some of Cleveland's suburbs, dissatisfied with the quality of water service and the high rates charged, initiated lawsuits in the 1970s to regionalize the ownership and management of the system, similar to the NORTHEAST OHIO REGIONAL SEWER DISTRICT, organized in 1972. In order to avoid losing control of the system, the City of Cleveland had to agree to a more equitable formula for setting suburban water rates and undertake a massive program of renovation, rehabilitation, and improvement of the system—a program that in 1982 was projected to cost roughly $918 million. Cost projections were revised regularly as interest rates and projected demand for water changed; for the 1986-92 period, the projected investment in repairs and improvements was calculated at about $380 million. It was expected that the capital-repair and improvements program will extend into the 1990s before completion. Since the water system is a self-supporting utility, funds for the capital-improvement program were acquired through increases in water rates to repay bonds sold for construction purposes. These increases caused some political furor in the city council, however, despite the fact that Cleveland's water rates remained among the lowest of any major American city.