WATERWORKS TUNNEL DISASTERS occurred 6 times during the construction of water intake tunnels for Cleveland's water system, killing a total of 58 men between 1898-1916. Tunnels into Lake Erie were needed because by 1876 the increased sewage flow from the rapidly growing city had transformed its water supply into a health hazard. Waterworks Tunnel DisastersWater intakes built beyond the polluted shoreline yielded only temporary improvement. In 1896 a new 9' tunnel extending over 4 mi. into the lake was begun in order to bring fresh water into a newly built pumping station at Kirtland St. (E. 49th St.). Five of the 6 disasters occurred as a result of its construction. Two gas explosions in 1898, and one each in 1901 and 1902, took the lives of 28 tunnel workers. On 4 Aug. 1901, a fire was ignited by cinders from a boiler stack in a temporary crib built to house the workers; 5 men burned to death, 3 drowned trying to escape the crib, and 1 rescuer lost his life trying to reach workmen in the tunnel. The work was completed in 1904. The final disaster took place 12 years later, on 24 July 1916, when workmen digging in a 10' wide tunnel hit a pocket of natural gas. A spark triggered an explosion, killing 11 men and 10 would-be rescuers who were overcome by gas when they entered the pressurized tunnel. The hero was black Clevelander GARRET A. MORGAN, inventor of a breathing device/safety hood, who with his brother Frank and 2 others entered the gas-filled tunnel at the request of the Cleveland police. Sustained by the apparatus, they rescued 2 men and recovered 4 bodies. However, officials from the U.S. Bureau of Mines stopped further rescue and recovery efforts. 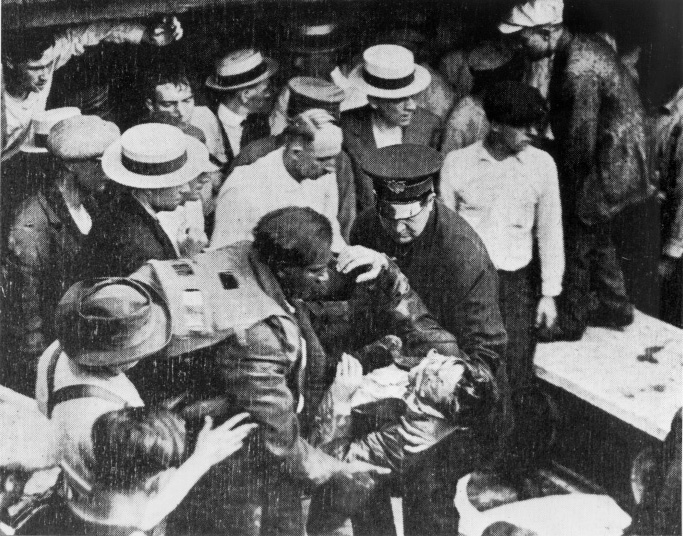